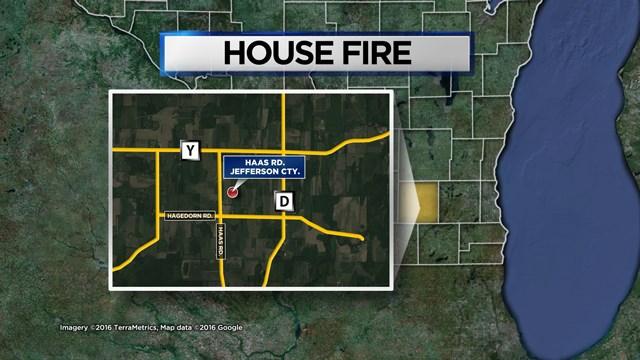 A rural Jefferson County man is in critical condition at the University of Wisconsin Burn Center after an early morning house fire southeast of the City of Jefferson.  According to the Jefferson Fire Department, the man is being treated for burns and smoke inhalation.   The fire in the two story home on Haas Road was discovered by a neighbor around 1:30 AM.  It quickly became a three alarm fire with firefighters from nine different departments responding.   The man, the sole resident of the home, was taken to the Fort Atkinson hospital and then transferred to the University Hospital in Madison.   When firefighters arrived on scene, the house was fully involved with fire coming out of the roof and windows.  Officials say the house burned to the ground and is a total loss.  Water had to be trucked into the site and firefighters were hampered by single digit temperatures and wind chills below zero.  The cause of the fire has not been determined.  Investigators will be returning to the scene later today.