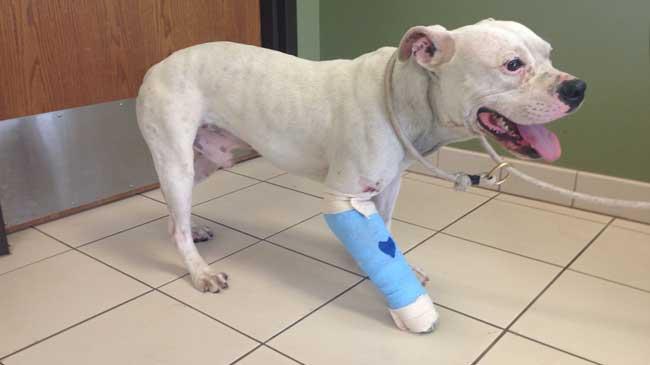 It's been a rough 24 hours for a pup affectionately being called Simba. The dog was wandering near 21st and Chambers streets when animal control says a person mistook him for a mountain lion, pulled out a gun and shot him.

Milwaukee Police responded to a loose animal complaint in the 2000 block of Burleigh.  The caller reported that he saw what appeared to be a lion or cougar walking past his home.  While responding to the call, officers received additional information from an anonymous caller who saw a suspect fire one gunshot at a stray pit bull dog at N. 21st Street and W. Chambers Street.  Responding officers found the pit bull, suffering from a gunshot wound to the right front leg, at N. 24th Street and W. Burleigh Street.  Officers took Simba to the Milwaukee Area Domestic Animal Control Commission for treatment.

\"The bullet went through his leg, fractured his bone.\" Executive Director of MADACC Karen Sparapani said.

Neighbors have been fearful ever since someone says they spotted a lion in the Brewers hill neighborhood, Monday night. Photos and videos have surfaced of a large cat-like animal, but it hasn't been found.

\"It's true that they're more afraid of us than we are of them. They just want to eat their food and make their babies,\" Sparapani said.

Tough luck for Simba he now has a full cast for six weeks, stumbles along, and will need medication for pain.

\"Dogs feel pain just as we do, they just don't register it the same, they can't put it into context as we can.\"

Animal control is now warning others to be cautious, but not reckless. They’re grateful the situation wasn't worse.

\"Please do not discharge a firearm, because often beside from maybe not shooting the right animal, a human can be injured.\"

Simba is a stray, MADACC hopes someone comes forward as the owner.