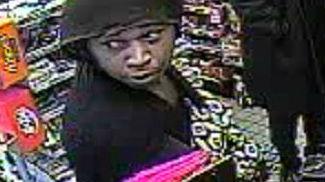 A Speedway Gas Station located at 6804 W North Ave was robbed just after 8 AM on Thursday, according to Wauwatosa Police.

The initial reports was that a woman wearing a leopard print outfit and carrying a tiger print handbag pulled out a gun and demanded cash from the register and then took off running eastbound from the store.

Based on video surveillance, the suspect in this case appears to be a black male dress or disguised as a female. The suspect is approximately 5'5"-5'7" tall with a thin build. He was last seen wearing a black body suit with dark grey zebra print pattern under a black scoop-neck top and calf-length black skirt. He was wearing bright white gym shoes.

He entered the store pulled a black and silver handgun from the purse demanded the cash and took off running.

Anyone with information should contact the Wauwatosa Police Department at 414-471-8430.