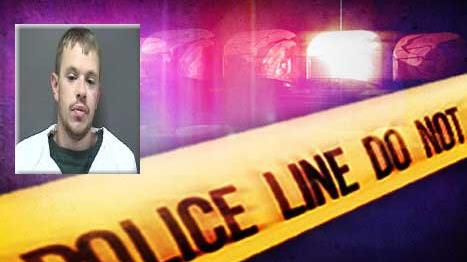 On Wednesday just before 9 PM, Sturtevant Police Department responded to a report of a robbery in progress at Phillips 66 gas station on Durand Ave/Willow Rd in Sturtevant.

The gas station owner reports he was in his office when he heard the doorbell ring. He then looked at the cameras in his office and observed a person covered head to toe with a Spiderman mask walking into the store. When the owner walked out he asked the suspect, later identified as Eric Eisel, what he was doing and the suspect told the owner this was a robbery and to open the register.

The owner walked directly outside as fast as possible and told a customer pumping gas to call the police because he was being robbed. Eisel again asked the owner to open the register. The owner told him he would not go back in the store unless Eisel sat in the parking lot.

The owner then walked in the store and locked the door because he did not want the suspect coming back inside. The owner opened the register, took out some money and walked back to the door. When the door opened police arrived and Eisel dropped his knife and some money he took and ran away.

Eisel was observed running north on Willow Road. Police gave chase and ultimately K9 Klaus of Kenosha with his Deputy tracked the suspect to a green Toyota Camry. A cell phone and knife sheath was later recovered from the car.

During an interview with Eisel at the police station, police learned Eisel left his two children a 5-year-old girl and 7-year-old boy at home alone. Eisel insisted he had left them to drink in his car, but never admitted to committing a robbery.

A breathalyzer revealed no alcohol in Eisel’s system and police detected no odor of alcohol.