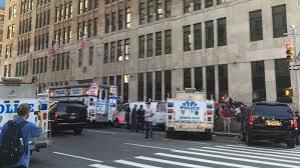 James O'Neill, the NYPD's chief of department, told reporters that Kevin Downing, who once worked for the Bureau of Labor Statistics, walked up to the metal detectors in the lobby and shot the guard at close range with a handgun.

The security company said the 53-year-old guard died at a hospital. FJC Security Services said Idrissa Camara had been scheduled to get off work an hour earlier but agreed to stay late.

\"Camara, who was armed, was an extraordinary senior guard who was well-trained, cared deeply about his job and knew that building better than anyone else,\" Michael McKeon, a spokesman for the security company, said in a written statement. \"It's clear from the facts that he never had a chance to defend himself in this instance.\"

Downing, 68, continued through the screening area, and came upon another employee near the elevators, police said

He shot himself in the head. The employee, who is not a guard, was unhurt.

The building, with one entrance at 201 Varick Street, has a post office, a credit union and offices for the Department of Homeland Security and the Bureau of Labor Statistics, among others.

O'Neill said there was no indication the incident was linked to terrorism. FJC Security said its search of company records found no connection between Camara and his killer.

Downing's house in Fort Lee, New Jersey, had been secured, but not yet searched, O'Neill said. Officials didn't disclose when Downing worked for the federal government.

Secretary of Homeland Security Jeh Johnson came to the site of the shootings.

\"I hope I have the opportunity to express condolences to the family of the victim sometime this evening,\" he said. He added he also wanted to drop by and check in on his employees to see how they were doing.