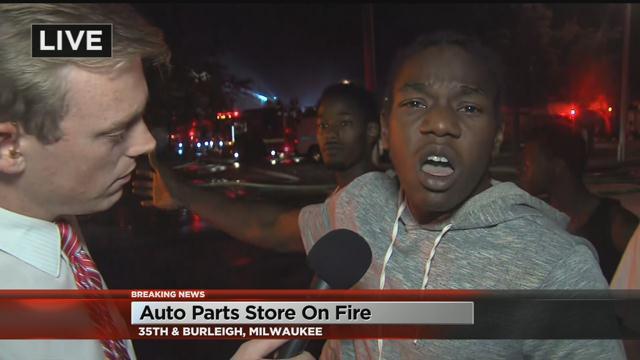 CBS 58's Evan Kruegel spoke exclusively to a man claiming to be the brother of the man shot and killed by police yesterday.

He was with a crowd of people at the O'Reilly Auto Parts as it burned last night.

“There is riot going on because once again the police have failed to protect us like they said they would. They failed to be here like they say like they sworn in to do. Us as a community, we are not going to protect ourselves. But, we don’t have anyone to protect us than this is what you get. So you got riots. We got people right here going crazy. We are losing loved ones everyday to the people that are sworn in to protect us,” said the man.

The incident he is referring to began when two uniformed MPD officers stopped two suspects in a car in the 3200 block of N. 44th Street at about 3:30 p.m. on August 13. Shortly after stopping the suspects, both occupants fled from the car on foot.  The officers pursued the suspects, and during the foot pursuit one officer shot one suspect, armed with a semiautomatic handgun, in a yard also in the 3200 block of N. 44th Street.  The suspect died from his injuries at the scene.