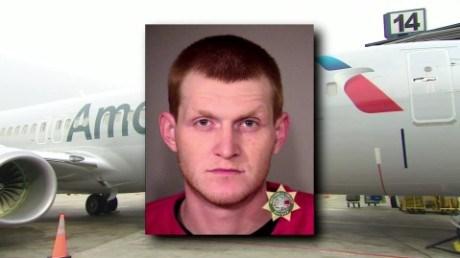 (CNN) An Oregon man has been charged with abusive sexual contact after he allegedly groped an unaccompanied teen aboard an American Airlines flight.

Chad Cameron Camp, 26, was arrested after the incident on a flight from Dallas to Portland on Wednesday night, according to a criminal complaint filed in the U.S. District Court.

A flight attendant had advised Camp that other seats were available, but he sat in the middle one next to the 13-year-old girl, the complaint said.

Camp allegedly began making small talk with the child in the seat next to him.

He leaned against the teen, nudged her, touched her with his elbow and placed his hands on her knee and upper thigh three times, according to the complaint.

A flight attendant distributing snacks saw Camp's hand near the girl's crotch, according to the complaint.

She described seeing a tear coming down the girl's cheek and ordered Camp to change seats.

She moved the girl up a number of rows, ordered Camp farther back on the aircraft and notified the captain, the complaint said.

The captain told Port of Portland Police, and the suspect was arrested by police and FBI agents when the plane landed in Portland.

Camp is being held without bail in Multnomah County Jail.

He made his initial court appearance Thursday, and is due back in court Monday afternoon.

His attorney did not immediately respond to CNN's request for comment.

The airline charges an extra $150 for unaccompanied minors to fly. The fee ensures "your child is boarded onto the aircraft, introduced to the flight attendant, chaperoned during connections and released to the appropriate person at their destination," according to American Airlines' website.

'She ... doesn't want to be on an airplane ever again'

An attorney for the teen's family told CNN affiliate KOIN that the girl felt trapped during the incident.

"She is already saying she doesn't want to be on an airplane ever again," Brent Goodfellow told the affiliate. "I sat with the family for about three hours ... she didn't want to be touched by her mom, every time she went to give her kind of a loving touch she would jump."

The airline declined to provide details on an ongoing investigation, and referred questions to authorities.

"American cares deeply about our young passengers and is committed to providing a safe and pleasant travel experience for them," American Airlines said in a statement.

"We take these matters very seriously and have cooperated fully and immediately with law enforcement officials in their investigation of the suspect."