Mall Santa turns away autistic girl and her service dog 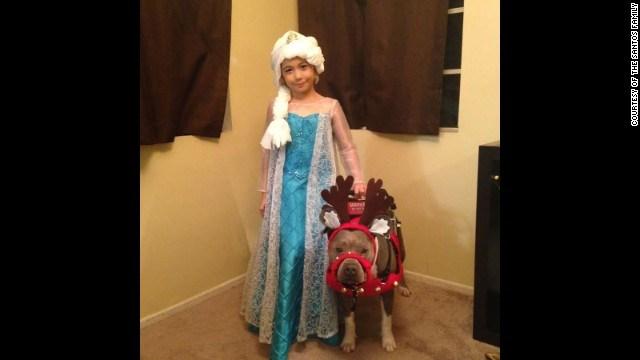 (CNN) -- One mall Santa might be getting some coal in his stocking this year.

Last week, Santa Claus and a helper elf from The Shops at Mission Viejo in California turned away a 7-year-old girl with autism and her service dog, a pit bull named Pup-Cake.

According to the Orange County Register, Abcde Santos, who pronounces her first name \"ab-suh-dee,\" and Pup-Cake stood in line for 30 minutes to meet with the unnamed mall Santa. But he declined to meet the girl because he feared the 5-year-old pit bull.

\"After the Santos family offered to remove the dog from the area, the building, Santa still refused to see the child,\" Julie Miller, a family friend who runs a Facebook page dedicated to Pup-Cake and service animals, told the Register.

\"Autism is accompanied by many sensory issues, included self-harm behaviors and feeling overwhelmed at times by lights, sounds, especially when waiting,\" according to the dog's Facebook page. \"Pup-cake the service dog's job is to intervene in those moments.\"

Word of the diss led to a viral campaign, #savePupcakesChristmas, with sympathizers angered over the incident posting comments on the Facebook page for The Shops at Mission Viejo.

The mall posted a statement that said, \"We share in your concerns regarding the situation today involving a Santa at The Shops at Mission Viejo. We do not condone the behavior displayed by Santa and have worked with our partners at Noerr, the company that hires our Santas, to replace this Santa with one that is more compassionate to our guests' needs.\"

It later shared a note from Miller about how property management and the mall had moved swiftly to correct the Bad Santa problem. The mall added, \"We look forward to welcoming back the Santos family and Pup-Cake for a special Santa experience.\"

A representative for the Noerr Programs, which provided the Santa and helper, said the pair have been transferred and given other duties.

\"For 26 years, The Noerr Programs has devoted itself to sharing the heart of Santa through the creation of magical Christmas experiences for all children and their families,\" CEO Judy Noerr said in a statement. \"The entire team at The Noerr Programs sincerely apologizes for any distress caused by this situation, and truly regrets the incident. We have reached out to the girl's family, in an effort to extend a private Santa visit with complimentary photos of both the child and her service dog.\"

The Santos family has declined to be interviewed. Miller told the paper the family is pleased with the decision to replace the Santa and hopes it will lead to better awareness.

\"They want people to get educated not about autism or pit bulls, but about the disabilities act so that little girls like Abcde won't go and see Santa and end up crying,\" she said.