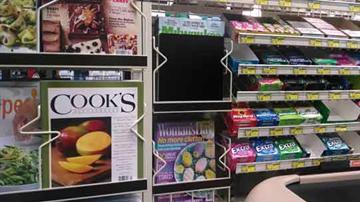 MILWAUKEE - An Assistant Editor for Milwaukee Magazine says her cover story was covered with a black board at a local store.  Abby Callard says the March edition of the magazine which displayed her story \"For Love & Money\" was covered from at least Saturday until Tuesday at Sendik's in Brookfield. She says the magazine's Circulation Manager called the store and was told it was store policy and they do that with a lot of magazines. Callard took a picture of the magazine covered up on Tuesday at the store and said a Cosmopolitan magazine was also covered up. Callard's story discussed the economic benefits for the state if Wisconsin would legalize same sex marriage. Callard says she's disappointed that something she put so much work into was covered up, but also says because of it a constructive conversation was started. The magazine is apparently no longer covered with a black board at the store. We contacted Sendik's for comment, but we we're told no one was available.