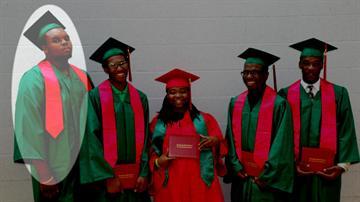 MADISON -- Amid all the chaos in Ferguson, some people from Wisconsin are bringing some solace to Michael Brown's family by making sure his three siblings never have to worry about paying for college.

The sounds and video from Ferguson, Missouri are at times looking a war zone.
A Madison man saw some of this first hand while bringing something positive to Michael Brown's family.

Michael Johnson, Dane Co. Boys and Girls Club CEO said, \"I got to meet the mother and the father. She was in tears and it brought me to tears. And I started thinking i couldn't imagine what she was going through.\"

Johnson says it meant a lot to brown's mother. \"I whispered in her ear and told her that Wisconsin was with her, and we stand in solidarity with her and her family.\"

Johnson teamed up with the founding director of a Madison based organization that helps find funding for people to go to college.

Sara Goldrick-Rab, the founding director of the Wisconsin HOPE Lab said, \"I read the story about Michael Brown's mother and how she worked so hard to get her son to college. And how she wasn't going to get to see that for a variety of reasons.\" she said.

Johnson says there's another 20-thousand dollars that has been raised to help out with any other college costs, and all of it has come from people donating.
Share this article: