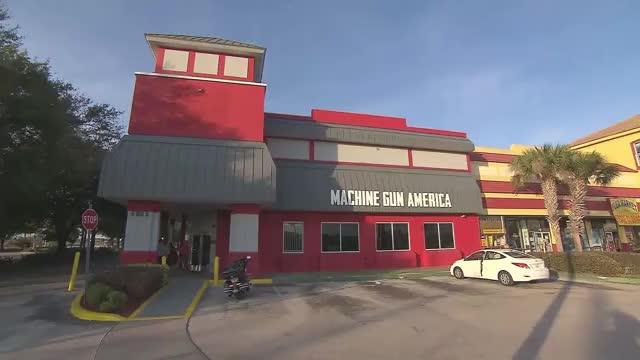 There are no rides to be found. Instead, visitors can pick up powerful assault weapons and blow off some steam while blowing away targets. This brand new, 13,000 square foot facility is just a few miles from Disney World.

Karen Rocheleau and her husband brought their 17 and 13-year-olds to Orlando to go to Disney.

Then they spotted Machine Gun America, “It's like wow, this is crazy, we just shot guns. Big guns! Yeah, big guns and in the room other people were shooting bigger guns and that was nerve-wracking,” said Karen Rocheleau.

“I was glad that I didn't let Jacob do it, 'cause he was just 13 and it is very powerful,” said Karen Rocheleau.

Very powerful and very popular with adults. Since opening its doors in December, Machine Gun America says only 6 percent of guests have been minors.

Children 13 and older can only come inside with a parent or legal guardian. However, Dr. Alan Delamater says even exposing young teens to this environment is dangerous.

“It's another family gaming activity, right? Wrong. I don't think it's just another activity. I think this is something that can seriously affect child development and not in a good way,” said Dr. Delameter.

He points to the incident last year at an Arizona shooting range where a 9-year-old girl firing an Uzi accidentally shot and killed an instructor. At Machine Gun America, Wess Doss says children under 13 aren't even allowed inside. 13 to 16 year olds are only allowed to shoot a submachine gun as long as it's not in fully automatic mode.

“Is there ever a reason for a 13-year-old to shoot one of these weapons?”

“We leave that up to their parents to make that decision,” said Doss.

In addition to those ranges, Machine Gun America also has several law enforcement-grade simulators, where you can use a fake handgun that has a laser. Teens can use those simulators but they still need their parents' permission.
Share this article: