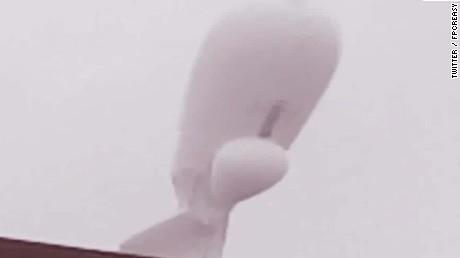 (CNN)A blimp associated with NORAD's surveillance of the East Coast that became untethered from its mooring in Maryland is now on the ground and authorities have it secured, Pennsylvania State Police told CNN.

According to NORAD, the blimp "is mostly deflated and located in the vicinity of Moreland Township, Pennsylvania. Local authorities are securing the area and there is a military recovery team en route."

The loose JLENS blimp had been in the air over Bloomsburg, Pennsylvania, and caused power outages before it came down, Columbia County Department of Public Safety Director Fred Hunsinger said.

The military took no kinetic action to bring it to the ground, according to the Pentagon, though there is no further information at this point about how it came down.

Hunsinger went on to say that there have been no reports of injuries or deaths, but the dragging of the blimp's cable had school leaders taking precautions to protect children as classes began to let out for the day.

Nixon noted it is rainy and windy in the area.

The state is in touch with local and federal authorities, including the State Police and National Guard, to secure the aerostat's downed equipment.

"These agencies will continue to be on scene to secure the area and ask all residents to remain away from the scene," the office said in a statement.

The military had been planning to scramble helicopters that can land next to the JLENS when it comes down in order to secure it.

Two F-16s scrambled from the New Jersey National Guard had been tracking the JLENS aerostat, a Pentagon official said, after the aircraft came loose from its mooring station in Aberdeen Proving Ground, Maryland.

The FAA also tracked the balloon to keep it safely separated from other air traffic.

JLENS, which is short for Joint Land Attack Cruise Missile Defense Elevated Netted Sensor System, is a system of two aerostats, or tethered airships, that float 10,000 feet in the air. The helium-filled aerostats, each nearly as long as a football field, carry powerful radars that can protect a territory roughly the size of Texas from airborne threats.

NORAD spokesman Mike Kucharek said that it is not yet clear why the blimp got loose, and that is part of an investigation.

The two blimps, put in the air to better protect the Washington, D.C., area from cruise missiles and other possible air attacks, were launched this winter.

The military official said the JLENS has remote deflation technology, but it may not be working. They provide 360 degrees of defensive radar coverage and can detect and track objects like missiles and manned and unmanned aircraft from up to 340 miles away.

Raytheon, which produces the aircraft, described the likelihood that the tether would break as "very small" in a post to its website made before the blimp became unmooored.

"The chance of that happening is very small because the tether is made of Vectran and has withstood storms in excess of 100 knots," the Raytheon post states. "However, in the unlikely event it does happen, there are a number of procedures and systems in place which are designed to bring the aerostat down in a safe manner."

At the time of their launch, the company said the 242-foot-long aerostats would be tethered to the ground by "super-strong" cables. The tethering system was designed to withstand 100 mph winds, according to Raytheon.

The aerostats carry technology that almost doubles the reach of current ground radar detection, officials connected with the project said at the time of its launch.

The blimps have no firing capability and don't carry cameras. Any response to missile attacks would still come from ground missiles, ships and airplanes, according to NORAD.