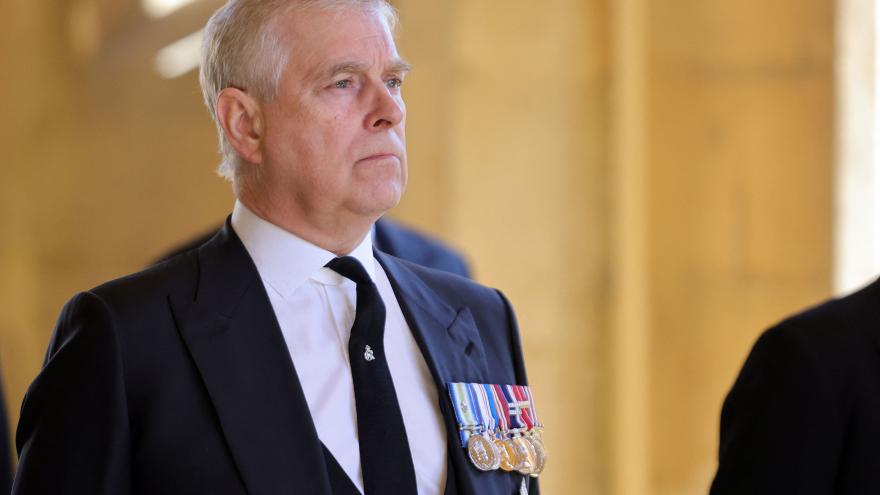 (CNN) -- London's police force has decided to take "no further action" against Prince Andrew, the Duke of York, following a review sparked by Virginia Roberts Giuffre, who has filed a lawsuit against him in New York for alleged sexual abuse.

The Metropolitan Police Service decided to drop their investigation after reviewing a number of documents, including those released in August 2021 as part of Giuffre's civil lawsuit in the United States.

"This review has concluded and we are taking no further action," the force said Monday in a statement emailed to CNN.

Giuffre, an alleged victim of sex offender and disgraced financier Jeffrey Epstein, alleged she was forced to perform sex acts with Prince Andrew. She said that she was trafficked by Epstein and forced to have sex with his friends, including the Duke of York, when she was underage.

Andrew has denied similar allegations from Giuffre in the past.

The Met also said it would not be taking action following a review of claims uncovered in an investigation by London-based Channel 4 News in June, which reported "more than half a dozen claims that young women and girls are alleged to have been targeted, trafficked, groomed, or abused in the UK for more than a decade by Epstein and British socialite Ghislaine Maxwell." Maxwell has pleaded not guilty to sex trafficking and other charges.

"We also reviewed information passed to us by a media organization in June 2021. This review is complete and no further action will be taken," the Metropolitan Police said.

The force "continues to liaise with other law enforcement agencies who lead the investigation into matters related to Jeffrey Epstein," the statement added.

This comes months after Metropolitan Police Commissioner Cressida Dick told radio station LBC, that "no one is above the law" when questioned about the allegations against the Duke of York.

"The position there is that we've had more than one allegation that is connected with Mr. Epstein and we have reviewed those, assessed those and we have not opened an investigation," Dick said at the time.

In the lawsuit, Giuffre alleges that Prince Andrew sexually abused her at both Epstein and Maxwell's invitation when she was a minor and that instances of alleged sexual abuse occurred at Maxwell's home in London and at Epstein's home in Manhattan and on his private island in the US Virgin Islands.

Both Buckingham Palace and Prince Andrew have strenuously denied her allegations.

But Andrew's associations with Epstein and Maxwell -- the former girlfriend of Epstein -- continue to haunt him.

US authorities have previously accused Andrew of not cooperating with attempts to interview him as part of the investigation into the alleged sex trafficking ring Epstein and Maxwell are suspected of operating.

The Prince stepped back from royal duties in the wake of a 2019 interview he gave the BBC in which he was widely considered to have damaged his own credibility. He now rarely appears in public.