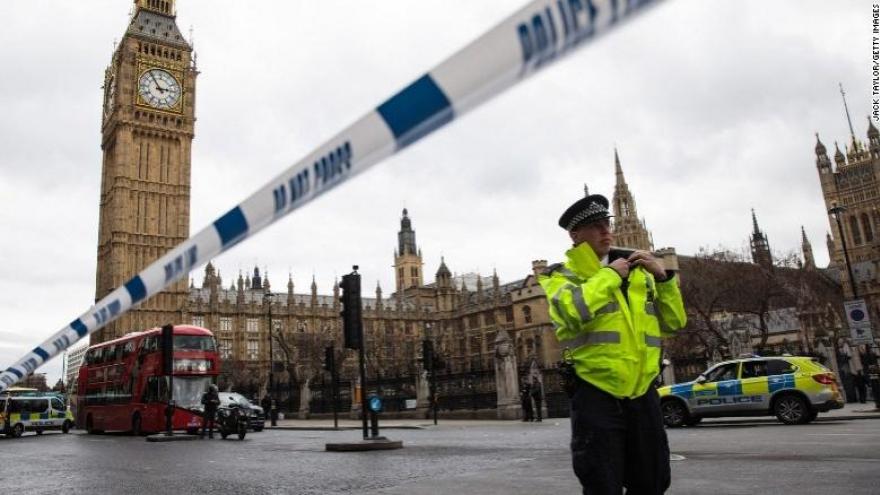 (CNN)Police across the UK have raided addresses associated with Wednesday's terrorist attack in central London, which left four people dead and dozens injured.

The fourth victim, a 75-year-old man, died Thursday night after his life support was withdrawn at a hospital where he had been receiving treatment, according to London's Metropolitan Police.Arrests were made in London and Birmingham, while homes were also searched in Brighton and Carmarthenshire, in South Wales.

Police said the addresses were "linked to the investigation" of Wednesday's attack, carried out by 52-year-old British man Khalid Masood.A 39-year-old woman was arrested at an address Thursday night in East London on suspicion of preparation of terrorist acts, police said. The woman, who has not been named, is being held under the Police and Criminal Evidence (PACE) act.

Six people -- two women and four men, their ages ranging from 21 to 28 -- were arrested at two addresses in Birmingham, a city in central England. The six were also held on suspicion of preparation of terrorist acts.

Another man, 58, was also arrested Friday morning at another address in Birmingham, and held on the same charge.Not a great deal is known about Masood, who was shot dead by a police firearms officer after he rammed a car into pedestrians on Westminster Bridge and stabbed an unarmed police officer outside parliament.

Born in Kent, Masood had been living in England's West Midlands region -- where Birmingham is located -- and had previous convictions, but not for terrorism offenses, police said. His most recent conviction was in 2003 for possession of a knife.

But police said he was not the subject of any recent investigations and there was no intelligence about any intent to mount an attack. British Prime Minister Theresa May said Masood was not part of the "current intelligence picture."

While a tweet from ISIS-affiliated news agency Amaq claimed Masood as a "soldier" of the terror group, inspired by its message, it provided no evidence of direct links between ISIS and Masood, whom Amaq did not name.

CNN's terrorism analyst Paul Cruickshank said the language used by ISIS asserting the attack was by one of its "soldiers" did not necessarily mean the group was claiming direct connections to the attacker. This phrasing has been used in the past by the group for attacks ISIS believes it helped inspire, he said.The attack was the first mass-casualty terrorist outrage in Britain since 2005 when 52 people died in the July 7 bomb attacks on the London public transportation system.

London Mayor Sadiq Khan told CNN that the city was protected by the best police and security services in the world. "I'm confident that we are doing all that we can to keep our city safe, to keep Londoners safe and to keep visitors safe," he said. Extra police officers will be patrolling London, he said.

A vigil was held Thursday in a show of solidarity and mourning for the victims.

"We come together as Londoners tonight to remember those who have lost their lives and all those affected by the horrific attack yesterday. But also to send a clear message, Londoners will never be cowed by terrorism," Khan told the crowd.