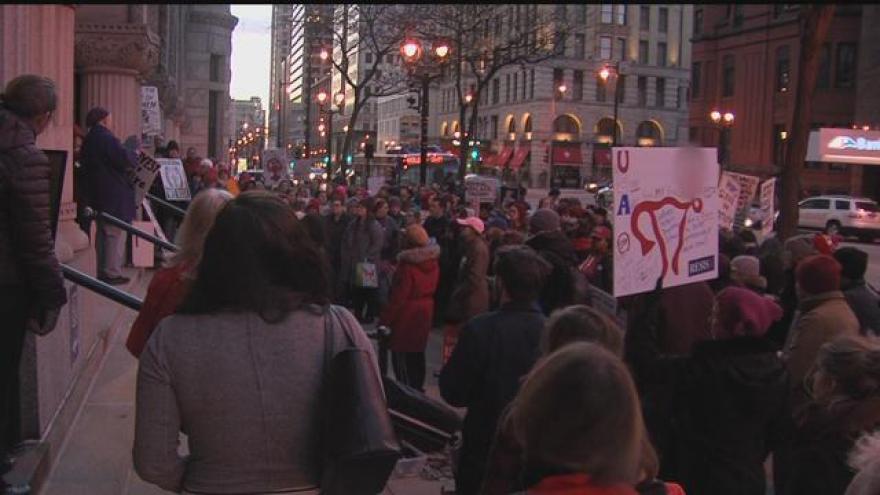 Amid the hustle and bustle of downtown Milwaukee, women of all ages, races and religions stopped to unite.

"It's a re-igniting of the feminist movement," said Pat Gowens with Welfare Warriors.

The movement is fighting for equal pay, racial justice, water protection, reproductive and immigration rights. The "Day Without a Woman Strike" joins others nationwide and aims to highlight the economic power of women.

"If we unite and we stand together, we will be able to empower the people around us and we'll be able to create change," said UWM student Tori Sweeney.

Women were asked not to work Wednesday, but not everyone can do that.

So the owner of The National Cafe showed her solidarity in a different way, by donating a percentage of sales to the Women's Center of Milwaukee.

Twenty other local businesses joined the cause.

"I have had a lot of help from women along the way, so it's important to give back when one can," said Nell Benton.

She took over the eatery five years ago and encourages women to go for their dreams. But the key is sticking together, flexing their girl power no matter how tough the fight may be.

"Women in all different echelons are going to continue to organize and continue to fight for justice for women," Gowens said.

The "Day Without a Woman Strike" gained momentum following the president's policies and comments on women. It also comes after the successful women's march on January 21st, the president's first full day in office.