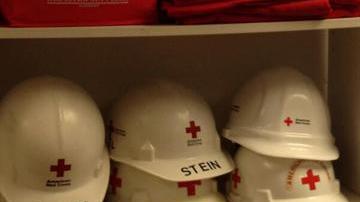 MILWAUKEE -- The images can be disturbing.

The power of weather.

\"There's just so much devastation,\" Jeannine Peters said.  \"So many homes just leveled. Others just a block away, still standing.\"

The pictures paint a grim scene.  When tornadoes ripped through parts of Kansas and Arkansas earlier this year - help came from all over - including Wisconsin.

\"I was deployed to Baxter Springs, Kansas.\"

\"I was down in Little Rock, Arkansas.\"

Both voluntarily spent more than 10 days in the middle of wreckage.  Helping people get back on their feet.

\"I think when you're down there and in it,  you realize the level of devastation,\" Peters said.  \"You can stand in a spot and as far as you can look in almost every direction it's just flattened. Just rubble. Parts of buildings.\"

\"They had lost everything,\" Reamer noted.   \"Yet they were positive and they were thinking about their neighbors.\"

\"We had cases of water, we had rakes, we had shovels, we had tarps, we had duct tape, garbage bags, work gloves, safety glasses. All this we were just giving out.\"

This was Reamer's first trip with the Red Cross.  She says it was hard to leave because there was so much left to do - but she has lasting memories.

\"The picture of the bowling lanes,\" Reamer recalls.   \"The bowling lanes was destroyed. Took a direct hit by the tornado. But in the middle of the picture is the rack of bowling balls still standing there.\"

Peters is a registered nurse.  She helped on the medical side in Arkansas.

\"As nursing staff we were down there assisting clients to replace medication or anything medical related. We also kind of worked hand in hand with mental health professionals.\"

Both volunteers spent nearly two weeks in an unknown part of the country.  Away from their families, helping people put their lives back together.

\"They were amazing,\" Reamer said.  \"They inspired me to think, my life is pretty easy, I've got it really good.\"

\"We take for granted everything that we have,\" Peters added.  \"You go down to a place like that  where they have nothing, no electricity, some of them don't have running water. It was kind of crazy.\"

Crazy but would they go back?

\"Absolutely. I don't want to wish for another disaster for anyone but if there is one I'll be the first one to sign up to go.\"