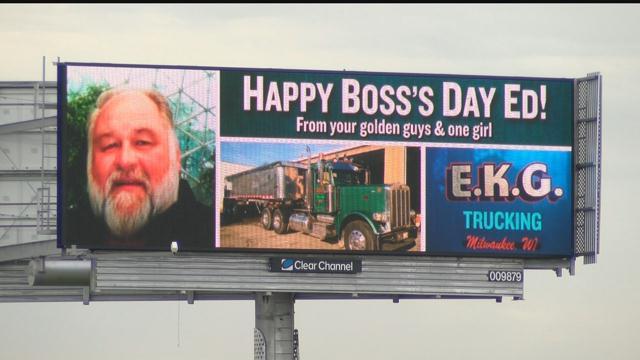 Ed Grober of EKG Trucking got a big surprise on his way to work Monday morning when he looked up and saw his face on a billboard.

"I had a couple different people call me this morning and say hey you're on a billboard.  You better go look."

Grober's employees think so much of him that they came up with the billboard idea. The message can bee seen on 45 and 145 and HWY 100 and Silver Spring.

"Everybody's proud of their trucks here and I got a really good group of guys," Grober told CBS 58 News. "So, they thought they'd just show off a little and whatever.  Make everybody feel good I guess.  They're all proud of what they do and the trucks.  Maybe I'm not such a bad guy I don't know."

EKG Trucking is a freight hauling company located near 35th and Teutonia.

The billboard was featured on the CBS 58 News at 4 p.m. as part of "Our Stories with Michele" which shines a spotlight on gestures large and small to bring the community closer together and give viewers a complete perspective of the place we call home.