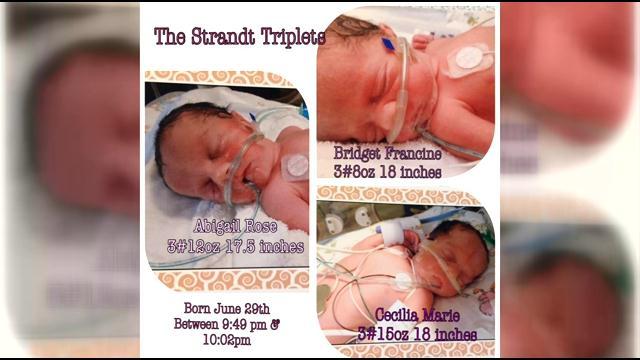 Abigail, Bridget and Cecilia Strandt aren't the band of Motown brothers, but the sisters have their own unique story worthy of fame.

They're identical triplets. It's something so rare, officials at Columbia-St. Mary's hospital in Milwaukee said the chance of it happening is one in 100,000.

Alison Strandt, mom, was in labor for 27.5 hours

\"I was able to actually push all of them out naturally in 13 minutes,\" she said.

Alison and her husband Brian already have three older children: a three-year-old, two-year-old and 11-month-old.

\"It's going to be a juggling act for awhile, but we'll figure it out though,\" said Brian.

But what the Greenfield parents may never figure out is genetics.

\"They (the triplets) were conceived naturally, no fertility drugs or anything,\" Alison said. \"No history of multiples on either side.

Abigail, Bridget and Cecilia each came into the world at under four pounds starting at 9:49 p.m. Monday, and in the order doctors has tracked them for months, as triplet A, B and C.

Alison recalls calling her husband after that shocking ultrasound.

But he said the tears and sacrifices are something he wouldn't trade for his growing family.

\"Life's a journey,\" he said. \"It's not about the destination, it's about the journey. So this is our journey.\"

The identical triplets will be in the NICU for the next few weeks, and the family plans to designate colors to each baby so they can identify them.

A Go Fund Me account is set up to help them buy a new van for six car seats. If you'd like to help, click here.