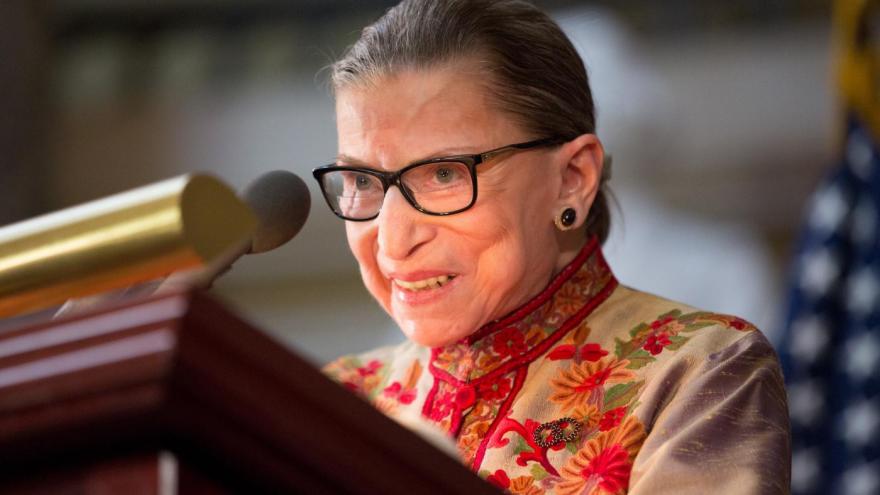 Local and national leaders have been reacting to her death. Some are already weighing in on whether President Donald Trump should nominate her replacement or if the seat should remain vacant until the outcome of his race against Democratic Presidential Nominee Joe Biden is known.

Trump called Ginsburg an "amazing woman," according to The Associated Press.

The president tweeted that Republicans have an obligation to fill Ginsburg's vacant seat on the Supreme Court "without delay."

.@GOP We were put in this position of power and importance to make decisions for the people who so proudly elected us, the most important of which has long been considered to be the selection of United States Supreme Court Justices. We have this obligation, without delay!

Biden said Ginsburg stood for everyone, calling her an "American hero" whose memory should be a blessing to those who "cherish our Constitution."

Ruth Bader Ginsburg stood for all of us. She was an American hero, a giant of legal doctrine, and a relentless voice in the pursuit of that highest American ideal: Equal Justice Under Law. May her memory be a blessing to all people who cherish our Constitution and its promise.

Sanders issued the following statement on the passing of Ginsburg on his website:

"The passing of Justice Ruth Bader Ginsburg is a tremendous loss to our country. She was an extraordinary champion of justice and equal rights, and will be remembered as one of the great justices in modern American history.

Unfortunately, we’ve already heard tonight from Sen. McConnell that he has decided to go against Justice Ginsburg’s dying wishes and violate his own past statements in order to bring a judge nominated by President Trump to the floor of the United States Senate.

That’s in direct contradiction of his statement in 2016, when he said Supreme Court nominees should not be voted on during a presidential election year: ‘Our view is this: Give the people a voice in filling this vacancy,’ he said. McConnell is cementing a shameful legacy of  brazen hypocrisy.

Thankfully not all Senate Republicans agree.

Just today, Sen. Lisa Murkowski came out against an appointment this close to an election. ‘I would not vote to confirm a Supreme Court nominee,’ she said. ‘We are 50 some days away from an election.’ In addition, several of McConnell’s other colleagues have previously stated they’re against confirming a new justice this close to an election. Sen. Chuck Grassley said in May, ‘You can’t have one rule for Democratic presidents and another rule for Republican presidents.’ Sen. Susan Collins said,  ‘I think that’s too close, I really do,’ when asked by The New York Times about appointing a justice in October.

But no one has been clearer than Judiciary Committee Chair Sen. Lindsay Graham. He promised in 2018 that ‘if an opening comes in the last year of President Trump’s term, and the primary process has started, we’ll wait to the next election.'

"The right thing to do here is clear. The Republicans in the Senate know it, and many of them have stated it clearer than I could. We should let voters decide. Period."

National Association for the Advancement of Colored People (NAACP)

Derrick Johnson, president and CEO of the NAACP, issued the following statement on the passing of Ginsburg:

"The NAACP family is devastated by the passing tonight of Supreme Court Justice Ruth Bader Ginsburg. Justice Ginsburg was an incredibly accomplished civil rights lawyer who devoted her entire legal career to the pursuit of equal justice and eliminating discrimination of all types. When President Bill Clinton nominated her to the Supreme Court, he called her the 'Thurgood Marshall of gender equality law.'

Justice Ginsburg’s 27-year tenure on the Supreme Court was marked by a passion for justice and the rule of the law. Her long, remarkable record includes her legendary opinions involving disability rights in Olmstead v. LC, and gender equality in the military, United States v. Virginia. She was also known for her powerful dissents, many of which she delivered from the bench. These include dissents in the voting rights decision of Shelby County v. Holder, the gender equity case of Ledbetter v. Goodyear Tire Company Co., and the affirmative action case of Ricci v. Stefano.

Our nation has lost its north star for justice tonight. As we move forward in the weeks and months ahead, we must honor Justice Ginsburg’s memory and extraordinary contributions and remember that the Supreme Court is the ultimate guardian of all of our civil rights and liberties."

Evers called Ginsburg a "stalwart public servant" and said her death is a "devastating loss."

Justice Ginsberg was a stalwart public servant who spent her life working to hold our country accountable for our promises of equity, equality, truth, and justice. What a devastating loss. https://t.co/EKGG7xHtDX

Barrett called Ginsburg an "American hero" who never stopped fighting for what is right.

Justice Ruth Bader Ginsberg is an American hero. She never stopped fighting for what was right, for the best in all of us. In her honor, we will continue to fight. She would have not wanted it any other way.

Lucas released the following statement on the passing of Ginsburg:

"I join the world in mourning the passing of United States Supreme Court Justice Ruth Bader Ginsburg. Justice Ginsburg was a champion and fighter for gender equality, women’s rights, civil rights, and the rights of all humanity. She enjoyed an accomplished and storied career long before ascending to the highest court in the land. Whether she was fighting for her opportunity to secure a clerkship or conducting extensive research on gender equality and pay equity for women, and authoring several works on the topics, or mapping out strategies to combat gender discrimination – sometimes including males as plaintiffs to demonstrate its harmful effects – Justice Ginsburg exhibited an acute ability to combine her intellect with skills and compassion that were unsurpassed by other legal scholars. Justice Ginsburg’s time on the bench reflected her love for the Constitution and rule of law and her ability to temper justice with mercy. She leaves a legacy of service for young men and women around the world to aspire to do something that she best described as ‘living life not for oneself but for one’s community.’ Justice Ruth Bader Ginsburg is now elevated to the highest bench in heaven. May her rewards be many and her rest with the ancestors be in power and love."

"I was deeply saddened to hear the news that Supreme Court Justice Ruth Bader Ginsburg passed away yesterday at the age of 87. Our country has lost a leader and a revolutionary who will not be forgotten.

As only the second woman to serve on the Supreme Court, Justice Ginsburg leaves behind a trail-blazing legacy, one that includes being a fierce advocate for women’s rights and a champion for justice. Known as the “Notorious R.B.G.” she was in many ways a cultural icon as well. She inspired a generation to be individuals, free thinkers, and stand up for what is right.

Justice Ginsburg’s character and principals were on display even in her final days as she dictated to her granddaughter, 'My most fervent wish is that I will not be replaced until a new president is installed.'

I hope those in Washington, D.C., and namely the United States Senate, heed those words and postpone rushing a new Supreme Court nominee until after the upcoming election - as was the practice under the current Senate Majority Leader during the 2016 presidential election year."

Coggs released the following statement in response to Ginsburg's passing:

"In service and in life, fighting for a better tomorrow is never easy. That said, Supreme Court Justice Ruth Bader Ginsburg made it look easy. As only the second woman to serve on the Supreme Court, she was a trailblazer for women’s equality whose impact on the law will be felt for generations to come.

In the midst of her own devastating health battles with cancer she remained committed to working at this nation’s highest court on cases that help set the trajectory of this country. Last evening, at the age of 87 she passed away.

At such a politically divisive time in our nation she proved to be an even-keeled advocate who helped add reason and stability to the Supreme Court and its decisions. She always encouraged others to “fight for things that you care about, but do it in a way that will lead others to join you."

Justice Ginsburg’s wit and candor will be sorely missed.

Supreme Court Justice Ginsburg will have no problem being remembered exactly as she wished as “Someone who used whatever talent she had to do her work to the very best of her ability. And to help repair tears in her society, to make things a little better through the use of whatever ability she has.”

Condolences to her family and this nation should be eternally grateful for her service."

Crowley noted Ginsburg's "grace and courage" that he strives to instill in his three daughters as he expressed his sorrow over her passing.

There are no words to express the sorrow or loss we feel tonight. Justice Ginsburg served the Court, the Nation, and Humanity with the grace and courage that I strive every day to instill in all three of my daughters.#RBG we will not stop the fight, even for a second.#RIPRGBhttps://t.co/o7M3y4VLyi

Myers said her heart felt heavy as she called Ginsburg the "greatest legal scholars of our time."

My heart is ever so heavy at this moment. I pray for the family of Justice Ruth Bader Ginsburg in their hour of bereavement. Justice Ginsburg was a champion for equity and inclusion and was one of the greatest legal scholars of our time. She will forever be “Notorious RBG”

Baldwin noted Ginsburg's "inspiring and historic life" as she paid tribute to her passing.

Ruth Bader Ginsburg lived an inspiring and historic life, and her work has shaped America for the better. As a woman, I join so many others who will not allow her legacy to be diminished or disrespected.

My prayers go out to her loved ones. https://t.co/erysYZiHbE

Larson called Ginsburg a "trailblazer" while expressing his sympathy.

One person can make a difference. Ruth Bader Ginsburg proved that. She was a trailblazer with generations following just at her heal. Such an inspiration in life and such a terrible loss for our country in her passing.

"I am incredibly saddened to learn of Supreme Court Justice Ruth Bader Ginsburg's passing. She was a fearless champion for women who exemplified strength, courage, and toughness.

Her lifelong fight to secure equality for women has inspired new generations and her legacy will be cherished in the hearts of so many.

She will always be forever notorious!

May her memory be a blessing."

Pocan commented on Ginsburg's passing, noting the loss of a "true champion of justice and equality."

We have lost a true champion of justice & equality.

Today, I remember her words, "There will be enough women on the Supreme Court when there are nine."

Rest in peace to an American hero. https://t.co/YCqMtTuIwe

Kind noted the loss of "a trailblazer, a tireless advocate for equality and a true champion for justice" while paying his tribute to Ginsburg.

Tonight, we lost a trailblazer, a tireless advocate for equality, & a true champion for justice. America is better because of Justice Ruth Bader Ginsburg, & her impact will be felt for generations to come. Mine & Tawni’s prayers are with her family, and may she rest in peace. https://t.co/HOvHEU0ZSn

Sad to hear that U.S. Supreme Court Justice Ruth Bader Ginsburg passed away after a courageous battle with cancer. Prayers for her family.