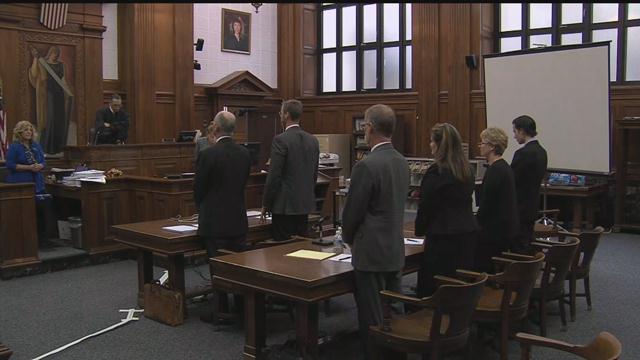 Gun stores across the country are reacting to the civil suit verdict against Badger Guns.

Milwaukee Officers Bryan Norberg and Graham Kunisch were awarded a total of 5-million-dollars, after Badger Guns sold a weapon in an illegal straw purchase. The gun ended up in the hands of underage, Julius Burton, who shot the officers point blank.

Jake Schneider with MGS firearms was one of many local stores watching for the trial's outcome.

Jake Schneider says, "There were some things with Badger Guns that they did improperly so I'm not worried about it in that regard."

Schneider agrees with that jurors, who found the store negligent on four of five counts. While he says his store trains its employees, and has ways to filter out straw purchasers looking to buy a gun and give it to a criminal. He still worries about being held liable for a sale they might miss.

"I can't tell someone's true motives if they really are intent on lying to us and putting up a front. It's the same as a car salesman how can they predict that an alcoholic is going to kill a family on the way home from the bar with this car."

Schneider predicts that his store's liability insurance rates could also go up. But for Milwaukee's Police Chief, Ed Flynn, the verdict was a win.

Ed Flynn, Police Chief of Milwaukee says, "In a year and a half six of my officers were shot by guns bought at Badger Guns or Badger Outdoors."

Chief Flynn predicts years of appeals, but adds the verdict is a step in the right direction.

"Reckless behavior where gun stores are supplying criminals with firearms has to be punished. So far that's not something congress has showed no interest in doing, but regular Americans get it and that gives us hope."

As for MGS Firearms, owners say stores need to continue to do their part, and hopes this doesn't give gun stores a bad name.