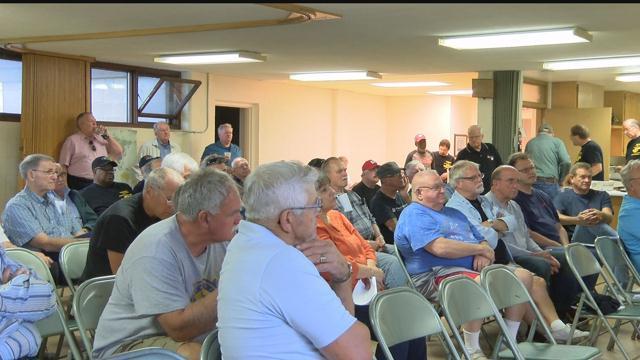 An update on the fight locally to protect pensions.  This, after lawmakers added last-minute pension cuts for some employees to the federal budget before it was signed in December.

Last week members of the Wisconsin Committee to Protect Pensions headed to Washington  to testify in front of the treasury department.

After meeting with lawmakers, many of whom had no idea what they signed into law, these men and women hope big changes are coming.

Bob Amsden says, for years, he'd been told that his pension fund with Central States was declining but he never thought money would be coming out of his pocket until a bill was voted into law this December.

"They didn't understand what they voted on because they didn't read it. When you get a 161 page bill shoved in your face with four hours to go to keep the country from shutting down; they voted on it with out knowing what was in it.  So now they're making corrections to what they did," said Amsden.

The bill allows multi-employer pension funds to cut individuals retirement savings by up to 60 percent-money they say isn't an entitlement, but wages they saved and invested for their future.

"It's like me coming in and taking 60 percent of your 401k and saying deal with it. Something's better than nothing," said Amsden.

Dan Campbell of the Wisconsin Committee to Protect Pensions says what is most shocking is how little lawmakers knew about this bill, saying the government should investigate where the money went.

"The dirty dog way that it was put through, without anyone reading it, no hearings, no input from retirees,  no investigation into what went on," said Campbell.

The committee says this isn't a union issue; 10 million people will be affected, and many of them aren't even aware.

"As for the retirees, a lot of them don't even know this is coming, they just don't think its ever going to happen in the country, that the government is going to cut your pension," said Bernie Anderson.

The pension cuts are law, so the question is now, can lawmakers somehow get rid of them?

According to the committee, the "Keep Our Pension Promises Act" sponsored in part by Senator Tammy Baldwin aims to reverse the cuts and she and Senator Bernie Sanders are looking to get other lawmakers to sponsor this bill.