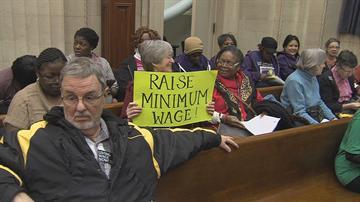 Citizen Action Wisconsin, a civics group including citizens from Racine and Kenosha, plans to stand outside the Congressman's office today at 1 p.m. and demand that he support a minimum wage increase.

The group says more than 600,000 people would benefit from a federal increase to $10.10 per hour in Wisconsin, and is circulating a petition to raise the minimum wage to that amount. Organizers say the increase would add an extra $114 to the paychecks of consumers, leading to a local economy boost.

CBS 58's Matt Doyle has more on the protest.