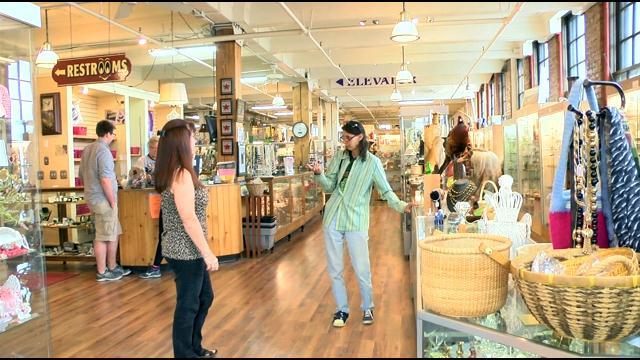 From the cream city brick, hidden under years of dirt, Cheryl and her husband Brian say their new antique store is iconic Milwaukee.

But then again, the current store, \"Antiques on Second,\" in Walker's Point is pretty iconic too. When they heard their building was being sold, converted into 55 apartments, they couldn't let history die.

\"We would have liked to have stayed, however the terms were not acceptable,\" said Belli.

So they've decided to move it-all three floors of it. When Belli talks about the daunting prospect of moving all the dealers and their belongings, he jokes around, saying, \"Well the joke is two weekends and a pick up truck.\"

And after searching for nearly two years, the Belli's bought a building just blocks away, and they say this is actually a move for the better.

\"We'll have 55 new neighbors in the old building and we'll have an enhanced experience here at Antiques on Pierce,\" said Belli.

With two additional floors and plans to hold special events at the Pierce location, they hope to keep impressing the locals and bringing in customers like California resident Ethan Stefansky.

\"I try and make this a yearly thing to come by and visit the store at least once while I'm visiting here,\" said Stefansky.

Sharing the history of Milwaukee, one customer at a time.

The Belli's are in the remodeling phase right now, and hope the building on Pierce will be open sometime in August. But they are planning for a slow transition, moving one floor at a time, so the store on Second and Washington will remain open until the other store is fully functioning. The Belli's say they want customers to be fully in the know, so they will be updating their website and Facebook often.
Share this article: