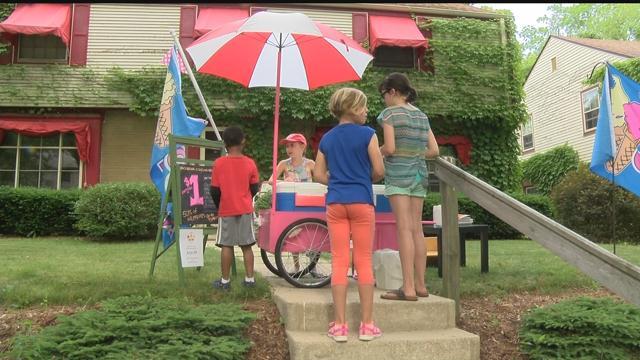 A young Wauwatosa girl is making a difference in her community one ice cream bar at a time.  CBS 58's April Dovorany met Lili Malone who sells ice cream to help out other kids in need.

Her parents told me there was no stopping Lili when she got the idea to sell ice cream to benefit the Hunger Task Force and for the past year  its been a smashing success.

"My parents said at seven you can't just go around asking for a job but they never said anything about a seven year old making their own job," said Lili Malone.

So last winter Lili took matters into her own hands and started planning her business: an ice cream stand.

"Her uncle built it. Then she pulled her dad in to get inventory and price it out, and asked me to make signs for her," said her mother, Erika Kent.

The cart made its debut last summer

"Everything is a dollar, we have Drumsticks, ice cream sandwiches, Creamsicles, Fudgesicles," said Lili.

With a strict business plan: Half Lili keeps for her college fund, the other half goes to the Hunger Task Force.

"Sometimes schools serve breakfast and lunch and in summer there isn't any school so three meals are becoming a problem," said Lili.

Which is why she's so driven toward the next sale.

"We've had to put a limit on things, there's been some aggressive sales techniques over ringing the bell," said her mom.

Though the hours that the stand is open varies, Lili always posts them on Facebook and when she's out here, she's out, sometimes for five hours at a time.

"She always wants to come in and count the money and make sure the inventory is tracked," said her father, Sean Malone.

This now eight year old plans her work days to make the most for HTF.

"It's gonna be really hot Wednesday and there's going to be a lot of builder people and I'm gonna be open so I'm gonna get a lot of business!!" she said.

Because her goal is to make everyone's life a little sweeter.

"Sometimes I get free ice cream from my stand. Because I'm running it." she explained.

Lili isn't open everyday, but when she is, she posts it on her Facebook page, which you can find here: https://www.facebook.com/lilisicecream/?fref=ts

The stand is located in Wauwatosa.

Lili has already raised $138 for the Hunger Task Force, and the same amount for her own college fund.