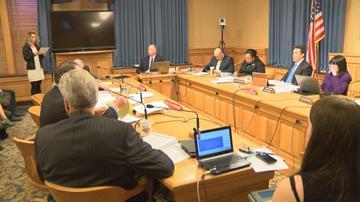 Silk Exotic owner Jon Ferraro proposed moving into a vacant front on Old World Third street two times before and was turned away.  Wednesday, he went before  the city's licensing committee for a third time.

Weirick joined dozens of people to testify against the club.

\"A strip club, such as Silk, which is dark and univiting is likely to drive out tennants and residents as witnessed today first hand,\" Weirick said.

Clayton Davis is one of those residents who lives next door to the proposed  location.  He worries a strip club there would be unsafe for his fiance.

\"Her safety is one of my concerns and we've been talking about it and we  decided if it does go in, we're going to start looking for someplace else to  move to,\" Davis said.

People talked about noise, drugs and human trafficking as causes for concern.   But Silk executives think those fears are unfounded.

\"If you knew this business, you'd know that we run a very good operation,\" Silk Milwaukee owner Criag Ploetz said.  \"Our  facts, our history speaks for itself.\"

Silk reps admitted sex trafficking happens in the industry, but they emphatically said it doesn't happen at Silk.  This club, they say, would be an asset in the community.

\"I've been to a lot of gentlemens clubs all over the world,\" patron Rick Grainger said.  \"I've never been to a club where i feel as safe as I do at Silk.\"

Ferarro didn't say if he'd seek a fourth application at the same location.