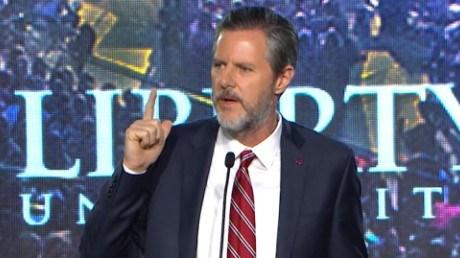 (CNN) At a time when most college campuses prohibit guns, Liberty University President Jerry Falwell Jr. thinks the opposite should be the case -- urging his school's students to be armed, especially in light of this week's massacre in San Bernardino, California.

"I always thought that if more good people had concealed-carry permits, then we could end those Muslims before they walk in and kill," he said.

Those comments from Falwell -- a son of the late evangelist, conservative political activist and Liberty University founder -- spurred vigorous applause from thousands of students gathered Friday night for Liberty's weekly convocation. In a phone interview Saturday with CNN, Falwell said he wasn't talking about all Muslims, just those who perpetrate attacks.

His comments drew a reaction from Ibrahim Hooper of the Council on Islamic-American Relations. He said Falwell's remarks "amped up" inflammatory rhetoric toward Muslims.

"It's part of an overall toxic anti-Muslim atmosphere that we're seeing, particularly in the past few weeks with Paris and San Bernardino," Hooper said. "Anti-Muslim bigotry was still on the fringes after 9/11. But it's moving toward the mainstream thanks to Donald Trump, Ben Carson and these type of comments."

Syed Rizwan Farook and Tashfeen Malik, the married couple behind the carnage in San Bernardino, were Muslim. FBI official David Bowdich has said authorities are investigating this incident as an act of terrorism, though authorities haven't specified a motive -- noting that workplace grievances may have factored in.

Farook worked with people gunned down at a holiday luncheon and authorities are exploring his communications with at least one person being investigated for terror connections. Malik pledged allegiance to ISIS in a Facebook post during the attack, according to three U.S. officials familiar with the investigation.

Fourteen people died and 21 were wounded before police later killed the pair in a shootout.

This mass shooting, like others before it, has spurred debate about what the government should do. In its first front-page editorial in nearly 100 years, The New York Times called for a drastic reduction in available guns in America. And President Barack Obama said reforms are needed so incidents like this are "rare as opposed to normal."

But Falwell made clear that he thinks doing more to limit guns is a bad idea given what happened in San Bernardino, taking a swipe at those who think otherwise to cheers from the crowd.

"It just blows my mind when I see the President of the United States say that the answer to circumstances like this is more gun control," he said.

A smiling Falwell made a point that he had a gun "in my back pocket right now," a remark which drew roars from students.

If people at San Bernardino's Inland Regional Center, where Wednesday's rampage took place, were similarly armed, would it have made a difference? Falwell suggested they would.

That's why he encouraged those in the crowd "to get your permit," noting that Liberty -- which has more than 14,500 students on its Lynchburg, Virginia, campus, plus over 95,000 enrolled online -- offers a free gun training course.

This doesn't mean that every Liberty student will be carrying weapons at all times, though. A person has to be 21 years or older to get a concealed carry permit in Virginia, after all, and Falwell pointed out that even those with permits can't bring guns into dorms.

Talking to CNN, the university president said he doesn't want what happened in San Bernardino to happen at Liberty, saying, "I want us to be prepared."

"And let's teach them," Falwell told students the night earlier, apparently referring to potential shooters, "if they ever show up here."