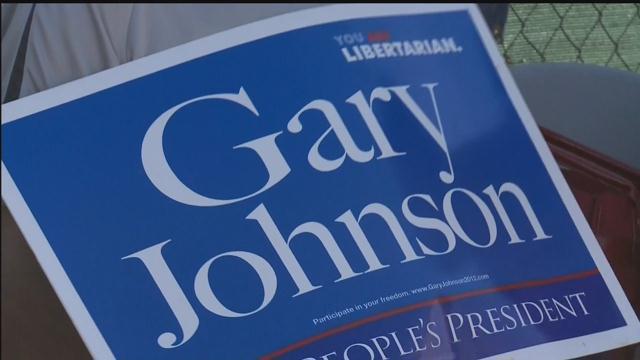 Libertarian Presidential candidate Gary Johnson is hoping Thursday night’s Milwaukee visit will give him a boost in state, and across the country.

Nationally, 70 percent of people do not know much about him, and in Wisconsin, that’s 72 percent.

The Johnson campaign says the crowd was it the largest it has had in weeks.

Johnson tried to connect to Wisconsin voters by thanking them for coming even though the Packers played, and also mentioned the time he spent vacationing in Wisconsin.

Johnson calls Donald Trump and Hillary Clinton the two most polarizing political figures possibly ever, and says he’s the third option in the race for the White House.

People heard the Johnson lay out his policy; he supports cutting taxes, cutting the size of government, and abolishing some federal departments.

He also wants to scale back this country’s international military influence, legalize marijuana, and he’s against building a border wall and deporting undocumented immigrants.

Johnson was a two term Republican governor in New Mexico, he ran for president as a Republican then Libertarian in 2012.

In a one-on-one interview with Johnson, CBS 58’s David Ade asked him why he left the Republican Party.

Johnson said, “I think that most Republicans are about small government. I believe that Donald Trump alienates more than half of Republicans, and I don’t think the majority of Republicans want to foist their social agendas on others, but I believe the Republican Party has become to represent that.”

Johnson said he believes the war on drugs has led to a lot of the violence in Milwaukee, and across the country.