Let a Llama Take your Troubles Away 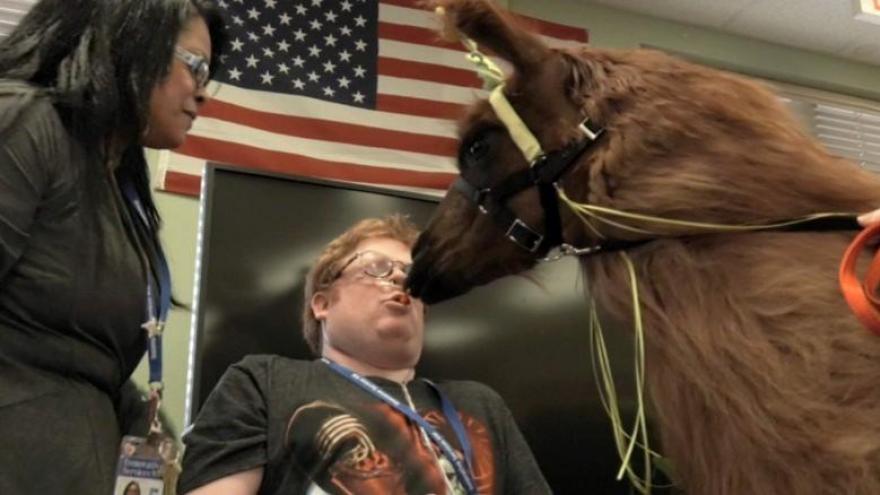 (CNN)Dani, 15 years old, walks into the library of Serendipity Center in Portland, Oregon.

Quiet and reserved, her face lights up when she sees the visitors waiting for her: "It makes me feel like they are my friends," Dani says. "I would always talk to them, and it would make me really happy."

In fact, they aren't dogs at all. Rojo the llama and Napoleon the alpaca are changing the face of therapy animals in the Pacific Northwest.

A few hours earlier, she and her daughter Shannon were walking Rojo and Napoleon through downtown Portland. It was quite the spectacle. Even in this city, known for having a quirky personality, this group drew a crowd.

Photos, hugs, selfies, and a lot of laughter -- that's what Rojo and Napoleon can do. And it's what Lori and Shannon have been sharing with the Portland area for 8 years and counting.

"We never dreamed that we'd be doing work with llamas and alpacas," Lori said. "We came to Oregon 20 years ago, and bought 2 ½ acres. Basically, we got tired of mowing the lawn, so we went to the fair to look for some animals to keep it eaten down."

The low-maintenance llamas caught their eye. So they went llama-shopping at a local farm. A red-colored llama named Rojo -- Spanish for "red" -- would become their first llama.

"Rojo just stood out from all the other llamas that were there," Lori said. "All the other llamas were out playing with their buddies in the pasture, and Rojo was only four months at the time, and he was just following the owner around her yard when she was doing chores."

That was 13 years ago. Since then, Rojo has certainly grown -- he weight more than 400 pounds now -- but his personality never changed.

"His temperament has always remained the same," Lori said. "Very people friendly, very touchable, enjoys being around new environments. We are just so thankful to have him to take around, because everybody falls in love with him." That's what stuck out to Lori and Shannon the most. Rojo brings joy to everyone he meets, regardless of age, gender, or just about any other qualifier you can think of; Rojo broke through them all. So when someone suggested they get him certified as a therapy animal, it was an easy decision.

Eight years ago, they went through an extensive process to get certified with Rojo. Since then, Lori says they have done over 1000 visits, and added four other llamas, and three alpacas. They go out almost every day of the week now, as part of the non-profit they started called Mountain Peaks Therapy Llamas and Alpacas.

"It's really neat taking a giant 400-pound animal everywhere," Shannon said. "A lot of times you get a look of shock at first. And then you get this intrigue. 'I want to feel how soft he is. He looks cool.' And then when they put a carrot in their lips, and he gives them a kiss, it's just instant, pure joy."

These "carrot kisses" are popular -- stick a carrot out from between your lips, and Rojo or Napoleon will take it. Llamas don't have any upper teeth, just bottom teeth, so they don't bite. Shannon and Lori cut up bags of carrots every day to take with them. From the Scerendipity Center, to Innovative Services -- for people with special needs -- carrot kisses are the highlight.

"I always love seeing people's excitement when they get that first llama kiss," Shannon said. "I mean it happens a hundred times during every visit. It's just seeing people so giddy, and just being the source of that joy is really -- it fuels me."

The Mayo Clinic says animal-assisted therapy can reduce pain, depression, anxiety, and fatigue. Smiling and laughter are also good for your health and longevity. The simple act of smiling has been shown to activate the happiness centers in the brain, impacting mood. Even a forced smile will do it.

But make no mistake -- with Rojo and Napoleon around, no one is forcing a smile. This is pure, genuine joy.

"When we first got certified with therapy for Rojo, I thought 'oh this will be fun,'" Lori said. "The first visit that we did, Shannon had him on the lead, and was taking him into a rehab facility. And I was kind of on his backside with all the nurses, and as she would take him in along the bedsides, I would hear them getting so excited. They said 'wow, Herald hasn't spoken in a month and I heard him say he's cute!' Or, 'look, Helen is trying to sit up and she hasn't moved for weeks.' Every room we were going in to, it was like seeing miracles happen."

Rojo is becoming a bit of a celebrity around here. Shannon has even written a children's book about him. For this mother-daughter team, it's yet another way to share Rojo with those who need him, or just need a smile.