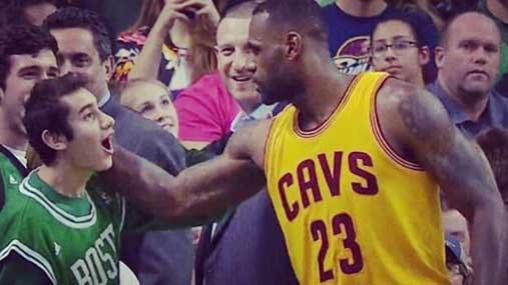 There was a standing ovation at Tuesday's Boston Celtics-Cleveland Cavaliers game, but it wasn't for the NBA players.

It was for a 16-year-old boy with special needs sitting court-side.

At a timeout during the second quarter of the game, LeBron James jogged over to Special Olympics athlete Aaron Miller to congratulate him on being a "Hero Among Us" recipient.

After hearing Miller's inspiring story on the Jumbotron, James knew he needed to meet him.

Miller suffered a stroke as a baby that left him with spastic diplegia, a form of cerebral palsy.

One side of his body may be paralyzed, but that hasn't stopped him from playing competitive sports like golf. The Newton, Massachusetts, resident continues to excel on his high school golf team -- even though he has to play one-handed.

The crowd inside Boston's TD Garden cheered as they saw a smile spread across Miller's face during his interaction with James.

"The bar got raised for everyone -- for every other player," she said.

And the excitement didn't stop there.

At the end of the game, a cameraman told Miller that James wanted to see him.

"I saw him taking off his shoes," Miller explained. "I was thinking, wait a minute, he's not going to do what I'm thinking of."

Slipping off his size 15 shoes, James handed the sneakers to Miller.

Again, James congratulated the teen: "You're awesome; you deserve everything -- congratulations," Miller recalled James' words on the court.

"He's a class act," Miller's mom said. "He really recognized Aaron and everything he went through."

Afterward, James continued his post-game interviews in his socks.

was drawing up the play. But I looked up by the JumboTron and I saw what he been through and where he is now. I think the doctor said he would never walk again or talk again," James told reporters after the game. "I looked up there and right from there, it became so much more than basketball."

Before leaving the arena, Miller and his mom thanked Celtics staff members for giving him the game of a lifetime.

"It was amazing, LeBron is like the Michael Jordan of this era, and having him express his emotions towards me, it was shocking to me," Miller said. "It meant the world."

On Wednesday, "King James" posted a photo of the pair on Instagram, which garnered more than 250,000 likes.

"Love you kid! Continue to beat the odds, continue being a inspiration to us all and continue to #StriveForGreatness!" he wrote.