LAX suspect shot TSA officer, walked away, then returned to shoot him again 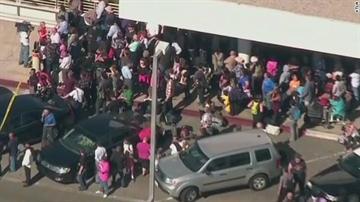 (CNN) -- The suspected Los Angeles International Airport gunman walked up to a security checkpoint, shot a TSA officer \"at point-blank range,\" went up an escalator, then came back down to shoot his victim again, a federal prosecutor said Saturday.

That TSA officer, Gerardo Hernandez, died of his wounds.

If convicted, Ciancia would face life in prison without parole or the death penalty, according to the federal prosecutor. The U.S. attorney general would decide if a death sentence would be sought.

According to Birotte, the suspect walked up to a TSA checkpoint in Terminal 3 around 9:20 a.m., pulled a \"Smith & Wesson .223-caliber M&P15 assault rifle out of his bag and filed multiple rounds\" at the uniformed officer.

He walked away, went up an escalator, then came back down to fire more shots at Hernandez, Birotte said. The gunman then proceeded through the terminal -- hitting two other uniformed TSA officers and a civilian passenger with gunfire, said Birotte -- before he was shot and wounded himself by airport police.

By then, people were sprinting for their lives -- down escalators, out emergency exit doors, cramming into bathrooms and first-class lounges, anything to get out of the line of fire.

Two people suffered what FBI Special Agent in Charge David Bowdich called \"evasion injuries,\" getting hurt as they were trying to avoid being shot.

Ciancia is being treated in a hospital after being shot himself by airport police, Bowdich said late Saturday afternoon.

\"He is unresponsive,\" the FBI official added, \"and we are unable to interview him, as of today.\"