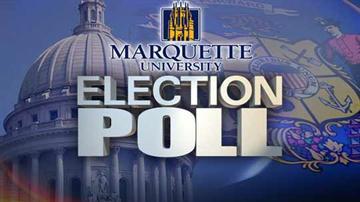 Milwaukee -- One of the country's most watched races for governor right here in Wisconsin, is also one of the closest.  Three previous polls shows Governor Scott Walker and Mary Burke in a dead heat, and a new one out Wednesday is no different.  The latest poll from the Law School at Marquette University shows Walker and Burke each have 46 percent of the vote, with 5 percent undecided.

While the race remains a toss-up, the poll director says shifting enthusiasm is one reason there are subtle differences between this poll and the poll released three weeks ago.  \"We have new data.  Some things have changed and some remain the same, \"  poll director Charles Franklin told a gathering at Marquette University Wednesday.  What has changed is Governor Walker had a three point advantage  among registered voters last August, and now it's a tie.  But among likely voters, Walker turned a two point deficit into a three percentage point lead.  Franklin said, \"I think you see that these fluctuations are somewhat meaningful, they're connected to which party is more mobilized and likely to turn out.\"

In fact the poll shows there has been a shift in enthusiasm with more republicans than democrats now saying they're very enthused about voting, and eight out of ten of republicans surveyed indicating they're certain to vote on November 4th.   Franklin cautions, \"but what goes around comes around. So the idea that people are permanently fixed as likely voters is also mistake. It varies based on how they feel about the race, and it can shift up or down from one month to the next.\"

In response to the poll, the Burke campaign said \"Governor Walker's policies have left Wisconsin dead last in the Midwest in private sector job growth, and facing a nearly $2 billion budget shortfall.\"  A Walker spokesperson responded, \"While Mary Burke belittles the Wisconsin comeback, Governor Walker is traveling the state promoting his second term to keep our state moving forward.\"

For addition poll results, click on the links below.