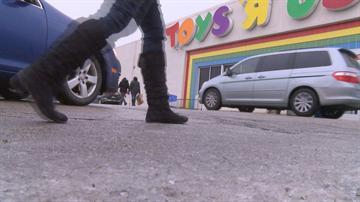 BROOKFIELD -- Get in and get out.  That's what most shoppers had for a game plan Saturday in order to beat the holiday rush and the coming snow storm.

But that was easier said than done.  Holiday shoppers searched aisle after aisle in parking lots like the Kohl's in Brookfield, trying to find a spot... any spot.

\"You have to understand you're going to be parking way in the back and taking the walk in here,\" shopper Tim Derrico said.  \"It took us probably 20 minutes extra than normal to get here.\"

The late Thanksgiving has a lot of people scrambling to buy their last-minute gifts.  Kohl's is trying to help that rush by staying open more than 100 straight hours through Christmas Eve.

\"I think it gives a lot of families an opportunity to go shopping who are working second or third shift that normally can't get out with their kids in bed and whatnot,\" Derrico said.

\"There's so many people that I know that would like any kind of job at any kind of hour, that I just think we need to let them have jobs,\" fellow Kohl's shopper Marion Shaw said.

You could find another jam-packed lot at the Toys 'R' Us on South 27th Street in Milwaukee.  That location will stay open 24-hours a day through 9 p.m. Christmas Eve.

Wilcox brought his family shopping.  He thinks stores and customers will benefit from the extra hours.

\"It makes it more convenient,\" Wilcox said.  \"Christmas came kind of late this year.  Between the work schedule it just makes things a lot easier.\"

Back at Kohl's, most shoppers agree.  They plan to take advantage of the hours, as long as workers are willing to come in.

\"It's no different than the other companies that are open late,\" Derrico said.  \"Police officers, fire fighters, all those other businesses.  So I don't see any difference here.\"

Macy's is another store joining Kohl's and Toys 'R' Us in the 24-hour group.  The stores tell CBS-58 they have daily deliveries through Christmas to make sure the shelves stay fully stocked.