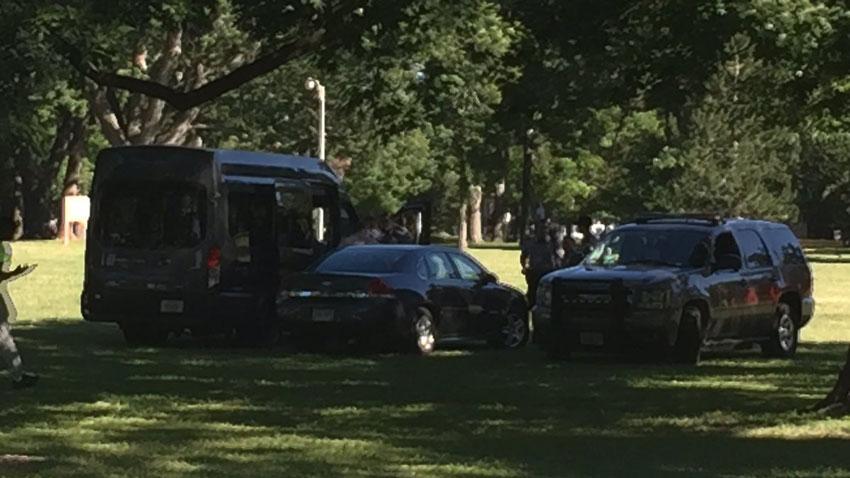 For several days this week, the focus has been on the Sherman Park Neighborhood.

Nearly a dozen, Milwaukee County Sheriff Deputies arrived at 5:00 PM on Friday to patrol the area.

"This was once a thriving area, the Sherman Park Neighborhood, one of the most desirable neighborhoods in the entire city of Milwaukee has been allowed to dissolve into this,” said Clarke.

Clarke displayed a map showing that most of the crime in the north side neighborhood happens in areas patrolled by police and not in Sherman Park where deputies provide protection.

On one night, police responded in riot gear after a rock and bottle tossing incident.

People who live here in the Sherman Park Neighborhood say they are not scared of the groups of youth that have come here the last few nights and they're not expecting to see violence break out.

After three nights of a heavy police presence surrounding groups of young people at Sherman Park.

Kyle Williams says while he and his neighbors don't like how some of the kids have acted.

He also thinks some of those kids don't have positive role models and are following negative influences.

"We just want to be firm and let you know look this is our neighborhood  we're definitely not going to take any type of activitey of such that has been going on lately over here... but at the same time we're also willing to work with you,” said Williams.

Sharlen Moore from Urban Underground said the kids who were at the park need help from people in the community rather than being faced with police.

"This is not the answer at all. If you look around you see a lot of adults that have answered the call, all it took was hey, our young people need us. Let's go to the park and support them,” Moore said.

“We know that so many young people out there doing the right thing, even when it was last night, not all of them young people were committing that crime, or committing those problems, and the ones that are, are somethings um, um reaching out for help,” said Bowen.

A Milwaukee Police spokesman said the department is working with the sheriff's office and the parks department to bring extra resources to this area.