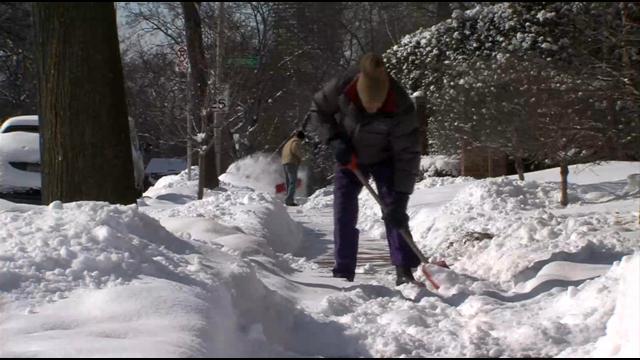 A band of lake-effect snow kept shovels, salt trucks and plows busy across the Milwaukee.

The Department of Public Works (DPW) deployed 102 salt trucks early Thursday morning, with half of them focused on the city's East side. Officials say crews had to plow and treat streets again because of the lake-effect snow.

With old man winter still hanging around, residents found themselves clearing cars and sidewalks once again. But some say digging out wasn't as bad this time around because the snow was light and fluffy.

\"You know, when we get into the end of February, I'd like to think you don't have to do much of it anymore,\" said Jim Ollrogge, East side resident. \"But my biggest concern was there wasn't that much snow and I could get out and do it. I have a crew that'll do it, but every time they show up its $100, so I'm saving money.\"

Once north and west DPW crews finish their districts, they'll be re-assigned to the south side where most of the lake effect snow fell.

Officials say salting and treating streets will be complete by the Thursday evening commute.