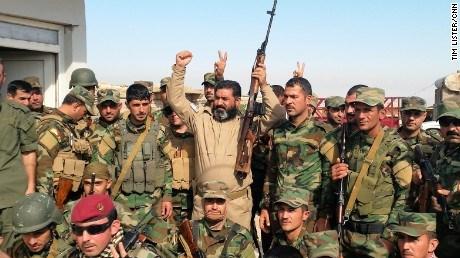 (CNN)Kurdish forces, backed by coalition air support, have launched an offensive to take back the Iraqi town of Sinjar from ISIS.

Reclaiming Sinjar is one big step toward dividing the "caliphate" that ISIS claims it is establishing across the region.

The artery that passes through the town links Iraq's Mosul -- ISIS' prized possession -- with cities it holds in Syria.

But the road also carries badly needed supplies to the 1.5 million people who still live in Mosul, where prices are rising and activists report hunger.

"It's not only important to recapture the town of Sinjar as a moral victory, but the ability to get the supply lines ... is extremely critical for future fights," said Lt. Gen. Mark Hertling, a CNN military analyst.

The operation includes up to 7,500 Peshmargas -- the Kurdish military force -- attacking the city from three sides to take control of supply routes, the Kurdish Region Security Council said Thursday.

By Thursday afternoon, the fighters had taken control of a number of villages near Sinjar.Before the push to retake Sinjar began, Kurdish fighters said they knew it wouldn't be easy.

Peshmerga commanders estimate some 600 ISIS fighters are inside Sinjar and likely plan to die there. Recent reinforcements have boosted ISIS numbers. They believe they will encounter hundreds of landmines and booby traps.

"Once they get into this town, it's going to be really slow going," said retired Lt. Col. Rick Francona, another CNN military analyst. "They're going to have to slog through this house by house, street by street. It's going to be very difficult."The world watched in horror last year as some 50,000 Yazidis, who live in the region, scrambled up Mount Sinjar in northern Iraq to escape the ISIS onslaught. About 5,000 men and boys in Sinjar and nearby villages were massacred, according to U.N. estimates, while teenage girls and women were sold into slavery.

Since then, Sinjar has become a chaotic jumble of demolished buildings whose only inhabitants are a few hundred ISIS fighters facing off against small detachments of Kurdish Peshmerga forces.

But an operation to retake the town has been looming.

Now, some 5,000 Yazidi fighters have been mobilized under the command of the Kurdish Peshmerga to take the battle to ISIS. Most are farmers; a very few have military experience.The Yazidis are one of the world's smallest and oldest monotheistic religious minorities. Their religion is considered a pre-Islamic sect that draws from Christianity, Judaism and the ancient monotheistic religion of Zoroastrianism. In ISIS' eyes, they're infidels.

The Yazidis and Kurds have lived side by side for thousands of years and are friendly neighbors.

The Kurds are Sunni Muslims, who have their own unique language and culture. They occupy an autonomous region in northern Iraq, but the Kurdish homeland also covers portions of Iran, Turkey, Armenia and Syria.

In Snuny, Iraq, a village that sits in the shadow of Mount Sinjar, Peshmerga forces have set up camp and Yazidi civilians have started to return home. Speaking to CNN last week, they vowed to take back Sinjar and exact revenge on ISIS.

And this month, the tempo of airstrikes against ISIS positions in and around the town has picked up.