Kleefisch to make 'special announcement' next week in Waukesha County

On Wednesday, Sept. 1, the Kenosha County GOP tweeted there will be a "Rebecca Kleefisch special announcement," which comes days after Kleefisch filed paperwork with the Wisconsin Ethics Commission. 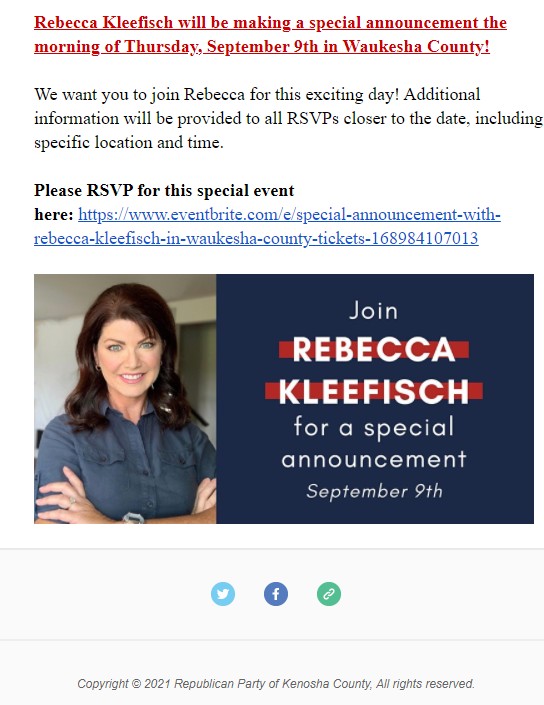 While Kleefisch for months has shown interested in running, her spokesman said it's not official but described it as a "next step" in launching a gubernatorial campaign.

Kleefisch served as lieutenant governor for two terms (2011-2018) with Gov. Scott Walker. Ever since their narrow loss to now Gov. Tony Evers in 2018, Kleefisch has been preparing for her shot at the governor's office.

Her work with the 1848 Project released a 16-page policy agenda this week that mirrors a campaign platform. Some policy items include hiring 1,000 police officers, banning critical race theory in schools, allowing lawmakers to set the rules for elections and prohibiting vaccine mandates.

"I think what she's doing is carefully positioning herself," said Mordecai Lee, professor \emeritus at UW-Milwaukee. "I can identify with Trump Republicans, I'm an Evangelical Christian, and I'm a woman. That's a pretty good basket in how she wants to win the primary."

It's an agenda that aims to attract former President Donald Trump supporters, Lee said, and a group that Republican candidates rely on in order win.

"What we've seen in previous elections recently is moderate Republicans or non-Trump Republicans don't have much support with primary voters in Wisconsin," said Lee.

"Gov. Evers has taken bold action to clean up the mess she left behind and he’ll continue to make sure we move forward and bounce back stronger than ever before," Roecker said.

Republican Rep. John Macco of De Pere also filed paperwork to run for governor. Others considering a run include GOP strategist Bill McCoshen, Marine veteran Kevin Nicholson, and Johnathan Wichmann -- who is the only one to officially announce a bid.