Kindergarten teacher stabbed, killed in front of students in France 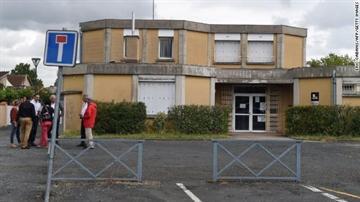 Paris (CNN) -- A woman stabbed and killed a French kindergarten teacher in her classroom as students watched Friday morning -- the last day of school before summer break, the French education minister said.

The teacher, 34, identified only as Fabienne, was stabbed in front of her students, allegedly by a parent of a child who attends the school in Albi in southwestern France, Education Minister Benoit Hamon told reporters at a news conference.

A suspect was taken into custody, Hamon said. He didn't name the suspect or talk of a possible motive, but said she was the mother of a child who'd been attending the school only for a month and a half.

\"It is my role, and it is the role of the government, to ensure that in the future we better protect our schools and shield (them) from violence,\" Hamon said.

Fabienne was married with two young children and was a \"fantastic teacher,\" Hamon said.

French President Francois Hollande expressed dismay and said public servants would look after the children who witnessed the killing, according to his office.

A psychiatric unit has been set up to assist people in the community, Hamon said.

Albi is about 40 miles (65 kilometers) northeast of Toulouse.