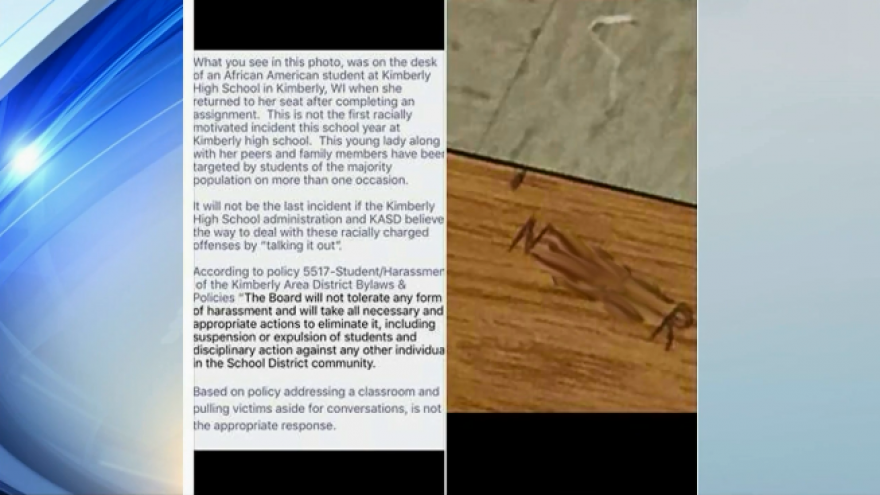 KIMBERLY, Wis. - (WFRV) Kimberly High School administrators are investigating a white male student who wrote the n-word on a black female student's workstation after she had gotten up from the table and walked away for a few minutes on Tuesday morning.

Kimberly High School principal Mike Rietveld said the school quickly cleaned up the desk and they are investigating the student who wrote the slur.

The incident happened during a technology class, where students often leave the room and go outside to learn photography and videography skills.

The male student could face a maximum of up to five days of suspension in accordance with Wisconsin law.

The female student reported the incident to the teacher, along with several classmates.

"She immediately shared it with the teacher, who got the administration immediately involved in the process of investigation," Rietveld said.

A Facebook post written by a woman who says she is friends with the female student and her family included a photo of the slur and description of the incident.

The post had been screenshotted and made the rounds on other social media platforms.

"I got home from work and I checked my phone and then I went on Snapchat and it was on a lot of people's stories," Peyton Schmidt, a Kimberly High School sophomore, said.

The student body at Kimberly High School has approximately 1,600 students, of which about 5-6% are minorities, Rietveld said.

"Personally I feel like this school is very accepting, there are a ton of teachers and students who are very accepting and very kind," Claudia Stuyvenberg, a sophomore at Kimberly High School, said. "There are some cases like this one that happen but it occurs very little, it's not often."

Principal Mike Rietveld said a handful of incidents occur at the school every year with students saying or writing slurs that target students of color, disabilities, or the LGBTQ community.

"I think it's a deeper problem because there's people here that should be treated well, but they're not because of their skin color," Schmidt said.

The school is offering support and counseling services to the female student who was targeted.

In this case, the female student couldn't stop what was written on her workstation, but she did take control of how the situation ended.

"Today, the teacher addressed the class about what happened and the behavior, and the student with the parent's permission, she also addressed the class and said how hurtful it was to her, and you know, guys, this is 2018, we're not living in the past and you know what, I'm a strong person, but these kinds of things are divisive and hurtful and unkind and literally appalling, and I give her so much credit for having the strength to do that," Rietveld said.

The original Facebook post written by a family friend said this is not the first time the student has been targeted because of her race, but the school says this is the only incident involving her.