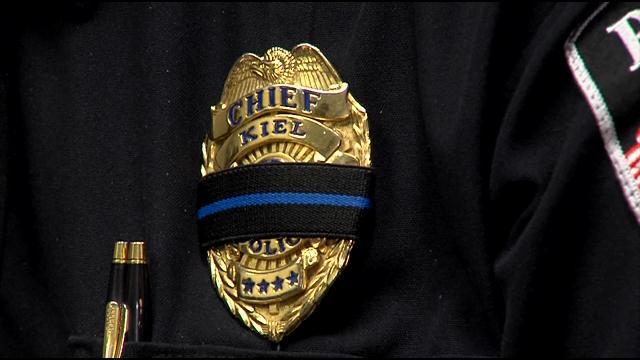 It's a quality Funkhouser recognized as soon as he met Casper several years ago. The 21-year-old went into the Wisconsin State Patrol Academy after high school and graduated in December 2014.

“His family asked him as he was going to take the patrol if he had any concerns or fears,” Funkhouser recalled. “[Trevor] said, 'No, I'm well trained. I know what I'm doing.'\"

Tuesday night, Casper was shot and killed while chasing a bank robbery suspect, Steven Timothy Snyder, in Fond du Lac. Snyder was killed in the shooting as well. Chief Funkhouser worked to confirm the news for the family that evening.

In a grim twist of fate, Funkhouser had been speaking to lawmakers in Madison earlier in the day about the risks officers face on a daily basis.

\"It will haunt me through my career to have said that in the afternoon and then to experience what I did later that evening,\" Funkhouser said, choking through emotion.

Across Kiel Wednesday, flags flew at half staff and signs saluted the fallen trooper.

“He was one of those kids who was very social and had a warm disposition, easy to talk to,\" Kiel Area Schools Administrator Louise Blankenheim said.

Blankenheim's teenage son played soccer with Casper. The trooper lettered in soccer and wrestling, stood on prom court and was named \"America's Next Top Model\" and “The best person to go to for advice” his senior year.

\"I know how hard it was for us just as staff to lose a child, a student,” Blankenheim said. “I can't imagine what the family is going through.\"

The school district had counselors on hand Wednesday ready to help Casper's 10th-grade sister and anyone else in Kiel mourning the loss of one of their own.

\"It hurt deeply,” Funkhouser said. “But we're a strong community, we'll get through it. We're good people here.\"

The family has not yet set a funeral date yet, but the State Patrol is planning a full officer's funeral in Kiel.

The Casper Family issued a written statement Wednesday saying, “We wish to thank our family, friends, co-workers, and all of the law enforcement officers across the United States wo grieve whoth our family during this time of horrific loss. Our son Trevor was an amazing young man who from a young age would do anything to help anyone. It did not surprise us when he selected a career in law enforcement.

Even as a young child he was always helping others. Trevor had a soft and good heart. He truly believed his sole purpose in life was to serve and protect others. When we asked Trevor if he was ready for his career as a Wisconsin State Trooper, Trevor proudly told us that he was ‘born ready to do this job.'

Trevor was so very proud of his career as a Wisconsin State Trooper. As a family we are so deeply honored that our son served as a law enforcement officer with the Wisconsin State Patrol and we share in their grief and loss. We are so deeply saddened by this loss and wish to thank everyone who has assisted us during this time. We ask that you please allow us time as a family to grieve and respect our privacy.\"