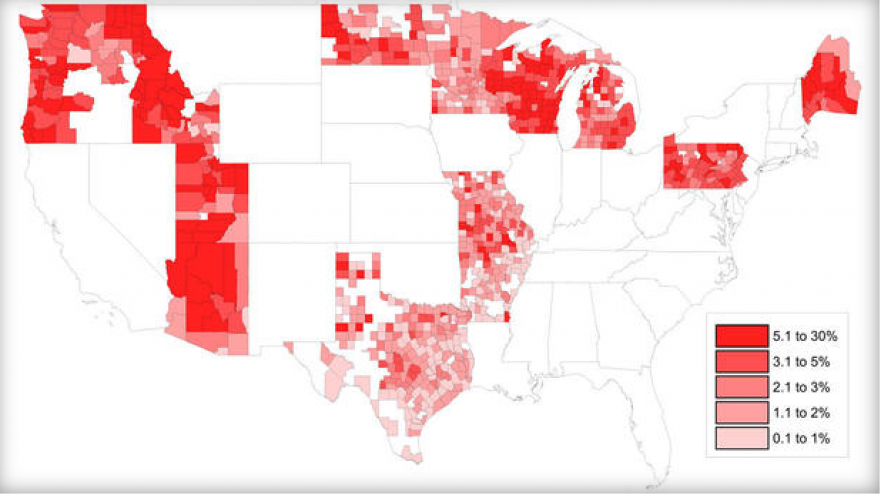 (CBS NEWS) A rise in non-medical exemptions from childhood vaccinations in certain areas of the United States has created several geographic "hotspots" where children are more vulnerable to preventable disease outbreaks, new research finds. While some children cannot be fully vaccinated for medical reasons, others are not vaccinated because of their parents' religious or philosophical beliefs. A major reason behind choosing not to vaccinate children for philosophical reasons is the erroneous and disproven claim that vaccines cause autism.

Currently 18 states in the U.S. permit non-medical exemptions from childhood vaccinations due to philosophical beliefs.

An analysis published in the journal PLOS Medicine found that since 2009 there's been an increase in the number of children enrolling in kindergarten with a non-medical exemption in 12 of these states.

As a result, the researchers identified 15 metropolitan clusters of higher rates of vaccination exemptions — where more than 5 percent of all kindergarten-age children are unvaccinated — which correlated with lower rates of MMR (measles, mumps and rubella) vaccination coverage. These "hotspots" include:

Additionally, the study identified 10 smaller counties with more than 14 percent of kindergarten-aged children are unvaccinated. These counties are predominantly in Idaho, with others in Wisconsin and Utah.

"Our study of vaccine exemptions find that while nationally immunization rates may have not changed much, we may have unmasked a number of both rural and urban hotspots where large numbers of children are not receiving access to life-saving vaccines," study author Peter Hotez, professor at Baylor College of Medicine and co-editor-in-chief of PLOS Neglected Tropical Diseases, told CBS News. "Much of this reflects organized and well-funded anti-vaccine activities among 18 U.S. states that allow non medical exemptions for reasons of personal beliefs."

Vaccine-preventable infectious diseases like measles are currently not widespread in the United States thanks to herd immunity -- meaning the majority of people across the country have been vaccinated, which keeps outbreaks from spreading. This ensures the number of people vulnerable to infection is small and helps protect those who can't be vaccinated by preventing their exposure to the virus in the community.

However, that changes the more people go unvaccinated.

"As larger unvaccinated populations grow, particularly in highly mobile cities, the potential for vaccine-preventable disease outbreaks grows," Hotez and co-author Melissa Nolan of the University of South Carolina said in a joint statement. "Measles outbreaks are of particular concern because measles is so highly transmissible and is associated with high morbidities, leading to hospitalization and sometimes permanent neurological injury or even death."

The authors emphasize that 90 to 95 percent vaccine coverage is needed to protect children from measles, citing the 2014-15 outbreak linked to Disneyland in California that was associated with low vaccination coverage. That outbreak spurred lawmakers to pass a ban on non-medical exemptions in the state.

The researchers say they're working on a second study to evaluate what the populations in the high vaccination exemption "hotspots" have in common so they can "better target public health education campaigns aimed at increasing vaccination uptake by these communities."