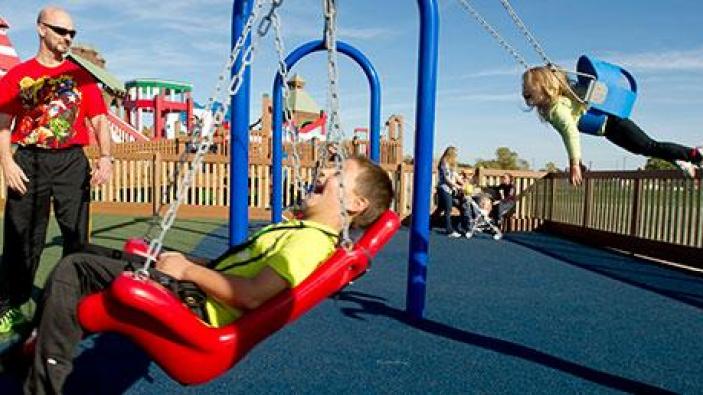 Parks Chairman Scott Gordon says the surface has shown unexpected wear and tear since the park opened in October. Last week, the city brought in a specialty contractor to investigate.

"The results of that test showed that the floor was failing in certain places," he says. "That was good enough for us to say we're going to have to close it, because we as a city will always err on the side of caution."

Gordon says the flooring failed a 'fall test', designed to ensure children falling from up to 6 feet would avoid injury.

The rubber surface allows people with disabilities to reach equipment that they otherwise would not be able to. That includes Amity Forsythe, a 7-year-old with Spina Bifida.

Now, she's on the outside looking in, as orange closed signs and wire surround the playground.

"Hearing the closure was a gut punch," says her mother Jaime. "The flooring is supposed to be the safest flooring there is. So for that to be an issue, it's just wrong on the company to not do the job that they were supposed to do."

City officials say the contractor is working with them to address the problem.

The same contractor recently completed work on an all-inclusive playground in Franklin, which is now investigating its park as well.