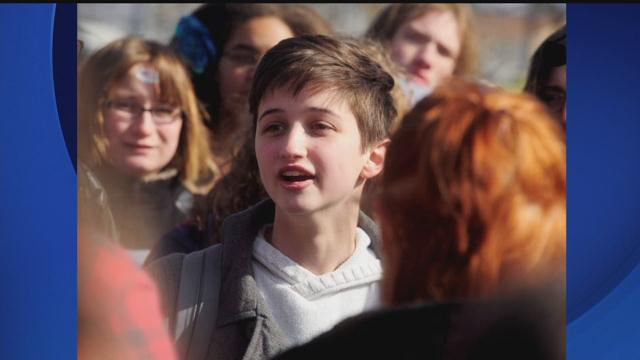 A transgender teenager is filing a lawsuit against the Kenosha Unified School District, claiming the superintendent and school employees are violating his constitutional rights by refusing to recognize his gender identity.

Ash Whitaker and his mother filed the lawsuit on Tuesday.

The teenager was born a girl, but identifies as a boy. Whitaker says his peers fully accept him, but school faculty does not.

The lawsuit claims Whitaker has been denied access to the boys' bathroom and was told to wear a green wristband to monitor his bathroom use.

It also states that Whitaker was required to room with girls on a school trip to Europe, even though he was uncomfortable doing so.

This isn't the first time Whitaker has drawn national attention. Last spring, students protested at Tremper High after the school said it wouldn't allow the transgender student to run for Prom King -- a decision that was eventually reversed.

"Kenosha Unified was recently made aware of the lawsuit filed against the District alleging discrimination against a transgender student.  The District and its legal counsel are reviewing the complaint and all of the allegations asserted in the complaint. Even a cursory review of the complaint shows that some of the factual allegations are patently false. The District does not have a practice or policy requiring any student to wear a wristband for monitoring any purpose or for any reason whatsoever. The District has worked diligently with transgendered students and their families to address their unique needs and accommodations, including the family named in the suit.

Kenosha Unified's attorney, Ron Stadler, said, "The District is confident that when the litigation process establishes accurate facts and applies them to the proper legal standards its policies and practices will be found to be in total compliance with all laws."