Kenosha School Board member under fire for cell phone video 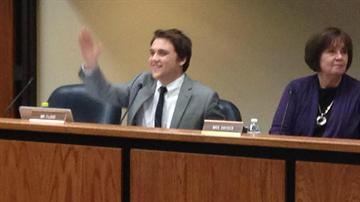 KENOSHA - On Tuesday night The Kenosha Unified School Board voted unanimously to censure its youngest member, 19 year old Kyle Flood. The official reprimand came after Flood had a couple of run ins with police recently.

UW-Parkside Police released video of Flood breaking door in a residence hall on New Year's Eve. Flood was charged with vandalism and will be in court for the charge on April 2nd. In November Flood was also cited by Parkside Police for possessing drug paraphernalia.

At Tuesday's School Board meeting Flood apologized for his actions and said he's learning from his mistakes. There's an online petition asking that Flood resign his School Board position. So far it has about 300 signatures, but it appears Flood has no plans to step down. He's up for reelection in 2016.