Kenosha rabbi concerned, not surprised by distribution of anti-Semitic flyers 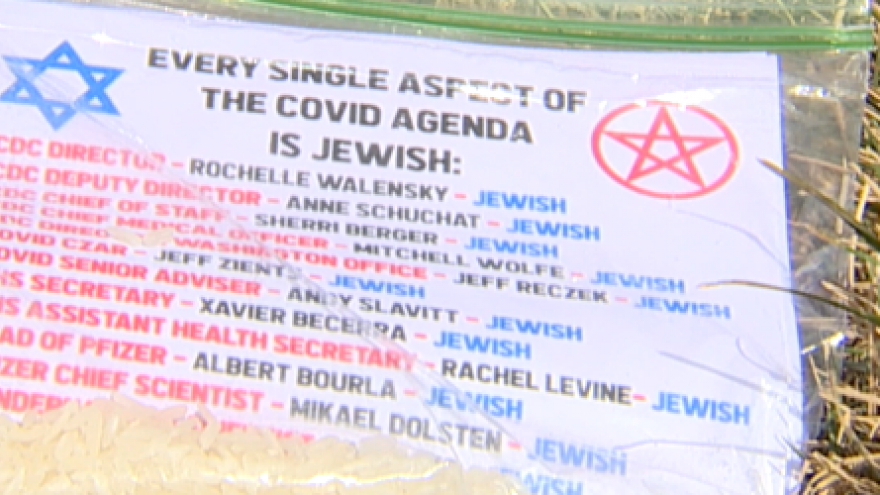 KENOSHA, Wis. (CBS 58) The recent distribution of anti-Semitic posters across six states, including Wisconsin, is the latest episode in a series of anti-Semitic incidents across the globe.

Posters distributed in Colorado, Texas, Maryland, California, Florida and in Kenosha, Wisconsin, all contained the same hateful message, blaming the Jewish community for the Covid-19 pandemic.

"That is a hundred percent false, that Jews are behind the Covid pandemic or somehow profiting from the pandemic," said Rabbi Dena Feingold, who leads the Beth Hillel Temple in Kenosha. "In some ways, not surprised because anti-Semitism is growing and expanding everywhere in this country, but it wasn't something we expected."

The Kenosha Police Department confirmed to CBS 58 News that posters had been distributed toward the end of 2021 and again this month.

The Anti-Defamation League attributed the distribution of the posters to the Goyim Defense League, an anti-Semitic hate group that's logo could be seen on the pieces of paper.

The ADL has reported a significant increase in anti-Semitic incidents over the last few years. In a tweet on Tuesday, the ADL said "These fliers are an attempt to intimidate and harass Jewish Communities around the United States. We appreciate the strong condemnation from local leaders and police forces. We must all #ActAgainstAntisemitism."

Rabbi Feingold says it's important to understand the history regarding anti-Semitism and for people to acknowledge that it is still very present in today's society.

"It's very important that people understand that this is a completely false idea and part of larger ideas that have been around for centuries, really, about this imagination that people have that Jews have outsize power or control over things in the world," Rabbi Feingold said. "It is important to get out to the general public that this kind of thing is very real. It's increasing in the United States and we need to be very vigilant and diligent in terms of dispelling myths and falsehoods and fighting against any kind of sentiment that discriminates against, or heralds accusations, against any group in society, not just against Jews."

Anyone that receives a flyer is encouraged to contact local law enforcement and agencies like the Anti-Defamation League or the Milwaukee Jewish Community Relations Council.