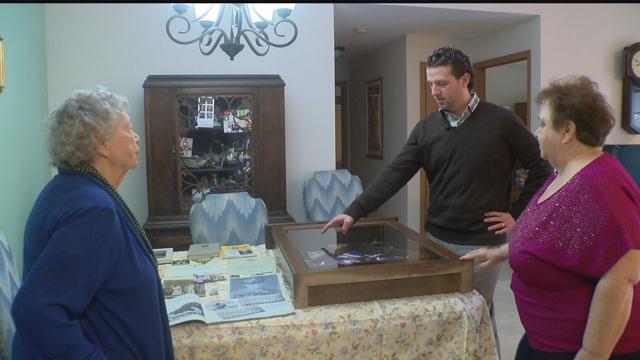 The family of George Mangiaracina, a World War 2 veteran and prisoner of war, didn't know a whole lot about his experience in the war because it was a topic he didn't like to discuss.

When he died in 1990, he took those experiences with him, not sharing a lot of the details with anyone.

Mangiaracina's grandson, Michael was given all of his metals, which sparked his interest in what his grandfather really went through.

He began researching and found a lot of interesting things, but the one thing that was missing was personal stories.

That changed in September of 2015 when Mary Mangiaracina, wife of George, received a phone call. It was from a man in South Dakota, claiming to be a prisoner of war with Mangiaracina, and had been trying to search for George for some 60 years.

Concerned she was being scammed, Mangiaracina called her grandson who called back,

"He told me some pretty intimate stories that only my grandfather would have known and someone close to him would have know. I called her back after I spoke with this gentleman, and said this was legit and we have to figure out a way to go see him," Mike explained.

The family set up a GoFundMe page to help partial fund a trip to travel to South Dakota.

He was able to provide the Mangiaracina's with so many stories about George. They even found a picture of the unit both men were in and found both of them sitting in the frame.

After the Battle of the Bulge in 1944, their unit surrendered to Germany.

7,000 men were crammed into train cars. It was so tight, Junior said it was almost impossible for anyone to sit down.

The top of the box cars were supposed to indicate POW's were on board, but this train didn't.

So, military air crafts flying near by started shooting at the train, killing hundreds of people on board.

"One was really fascinating fact, they were the only two men to survive out of their unit. And they obviously that gave us all goosebumps, because I wouldn't be here. Mary would have never met him. My entire family would have never been here. He never shared that with us," Mike said.

"It was really amazing to hear all of the things he went through. It was just thrilling," Mary Mangiaracina explained.

The Mangiaracina's say the trip help them fill a void.

You can learn more about this story on an upcoming episode of CBS58 Sunday Morning.