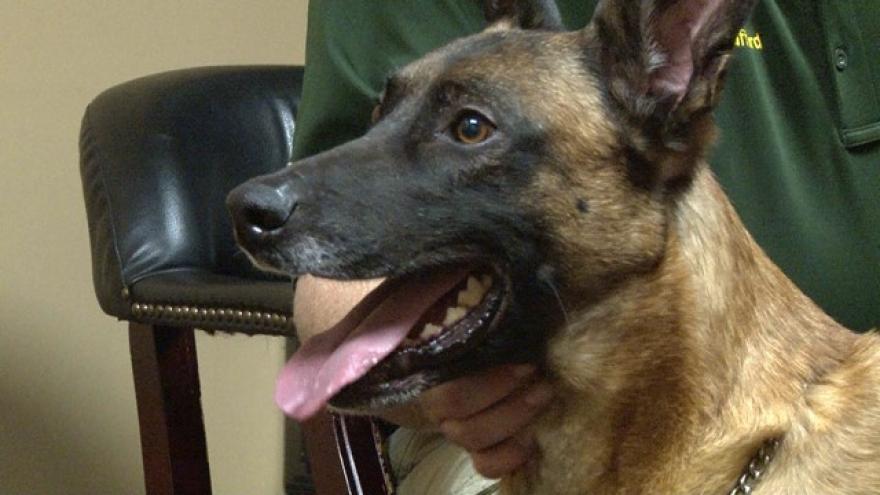 LONOKE COUNTY, Ark. (KTHV) — A Lonoke County Sheriff’s deputy got just a few years to make an impact on his community, but his colleagues believe he did better than most.

And on the day that Deputy K-9 Pajti died, dozens of law enforcement officers from around central Arkansas gave him a proper salute.

“He’s a special dog,” said Deputy Brooks Grabill, Pajti’s handler. “He’s worked his way into everyone’s heart. And he means a lot to this department and community.”

Pajti joined the Lonoke County Sheriff’s Department in 2013, and Grabill became his partner last summer. Grabill said he has had dogs and worked with dogs for a long time, but quickly discovered that Pajti was unique.

“Lovable. I mean, that’s the first word you can come to,” he said. “You know, a lot of people have a perception of K-9s being kind of aggressive, because they’re bite dogs. But that’s not Pajti’s personality. It was work to him. His personality was to love everyone. I mean, he loved the attention. He loved being around people, kids. It didn’t matter, as long as he was in the public eye. That was him. It’s where he shined.”

Grabill noticed a limp in one of Pajti’s front legs a couple months ago, and then a slow loss of energy. A veterinarian diagnosed the problem as bone cancer.

“It’s rapidly-advancing,” Grabill said of the cancer. “He’s tired, his energy level’s gone down. His body’s fighting the cancer, and it’s taken every bit of him, the energy out of him.

“He still has the spark in him, but his energy level has just gone down, and he’s got about 10 minutes’ worth of playing in him. And he just wants to go and lay down.

“This weekend, my wife and I—I was getting ready for work, and he normally runs around with the kids outside, playing, and he couldn’t do it. And so, my wife brought his bed outside and put it on the porch, so he could at least still be outside with us. And that was probably one of the hardest times.”Grabill was moved to tears as he talked about Pajti on Wednesday. He said the last few days were particularly rough, as Pajti was retired from working duty.

“Being a K9 is 24/7,” Grabill explained. “The dog’s always with you. He’s with you more than your family. You wake up and you go to work; he’s with you. Go home, take off your vest, he’s right there with you, as well. You eat dinner together, you eat lunch in your car together. It’s a bond. And it’s hard to see something like this happen.”

Grabill said Pajti was accomplished in locating drugs and in capturing suspects. While Grabill was Pajti’s handler, he was far from the dog’s only friend, which was fitting because Pajti is a Hungarian word that translates roughly to “buddy.”
“He was just an all-around great dog,” Grabill said. “But the things that he helped the most with, that helped our department, is with the schools, with the churches, and with the kids. You know, a lot of times, we’d go on calls, and there’d be an upset kid. And to get him to calm down, I’d be able to introduce him to Pajti, and they’d love on him, and play with him. And, you know, they just thought it was the neatest thing. It bridged that gap.

“Pajti was able to transform that task in an instant. You know, he saw a kid that was upset, he wanted to cuddle him.”

A large group of deputies and officers got one last chance to play with him Wednesday afternoon. Members of the LCSO, Lonoke Police Department, and North Little Rock Police Department met at the sheriff’s office to give the dog a final sendoff. Then they drove in a procession as Grabill rode with Pajti the Cabot Animal Shelter, where the dog would be euthanized.

Several Cabot police officers waited for them at the shelter. After a prayer, the law enforcement officers all formed a tunnel for Grabill and Pajti to walk through as they entered the shelter. Pajti, even with a limp caused by the large tumor in his leg, and tired from all the attention, kept his smile as he walked past them.

Grabill said he was pleased so many people took the time to honor Pajti.

The LCSO recently got a second deputy K-9, named Kona. Grabill said he is not sure if it will get a replacement for Pajti.