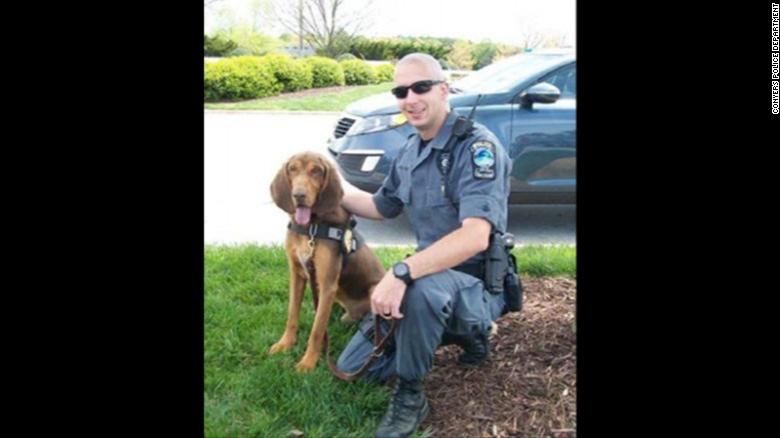 (CNN) A police K-9 died Thursday evening after being left for hours inside his handler's patrol car.

Zane, a 5-year-old bloodhound, was found dead at the handler's residence in Rockdale County, Georgia, according to Conyers Police Department spokeswoman Kim Lucas.

The bloodhound worked as a tracking dog with the department for four years, three with his handler, Cpl. Jerahmy Williams.

The Rockdale County Sheriff's Office responded to Williams' home Thursday and is conducting an investigation with the county district attorney's office.

Williams came home from a 12-hour shift at work and went to sleep feeling ill, according to Lucas. When Williams was getting ready for work in the afternoon, he discovered Zane dead inside his SUV, which was parked in his driveway. The dog had been in the car about 10 hours, Lucas said.

Williams called his immediate supervisor to report the incident.

\"We are committed to the care and proper treatment of our working K-9s. We are mourning the loss of our own,\" Police Chief Gene Wilson said.

Wilson announced Friday during a press conference that the department will look into a device that is used in daycare vans in order to keep their K-9s safe.

\"It's like a kill switch for the vehicle,\" Lucas said. \"A person will have to physically go to the rear of the vehicle and see the dog before turning off the ignition.\"

Wilson also mention in the conference that he believed Zane's death was an accident.

Williams' car did have a device known as a \"Hot-N-Pop,\" which is an alarm that would alert the officer of the car's temperature and roll the windows down for the canine. But the device was not activated because the ignition was turned off.

Commenters on Conyers Police Department Facebook page were critical of the police department, demanding the officer be charged with animal cruelty.

Williams, who has been with the police department for five years, is on administrative leave with pay, pending on the outcome of an internal investigation.