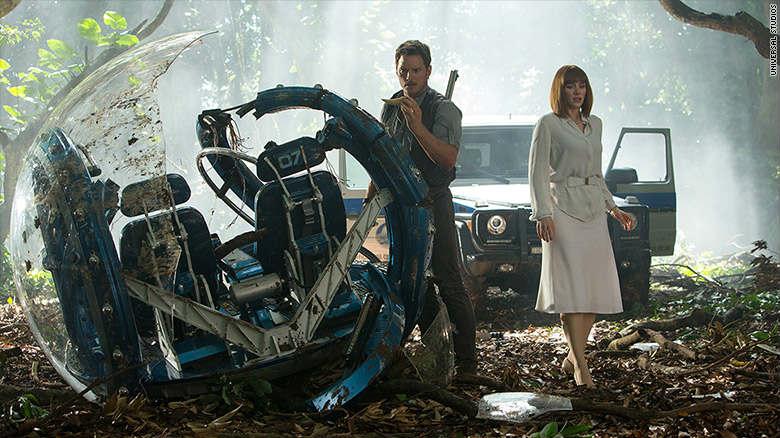 The Universal film likely had the second highest-grossing U.S. opening ever with an estimated $204.5 million in sales.

That would put the dinosaur thriller behind only the $207.4 million total of \"The Avengers\" in 2012. Final reports on weekend sales will be released on Monday.

The colossal debut for \"Jurassic World\" greatly exceeded the expectations of many Hollywood analysts, who believed the film would make about $120 million.

Steven Spielberg's classic movie first took audiences to an island overrun with genetically created dinosaurs in 1993. Since then, the \"Jurassic Park\" series has hauled in over $2 billion worldwide.

\"Jurassic World\" opened in more than 4,200 theaters. It is the fourth installment of the franchise, and the first film since \"Jurassic Park III\" in 2001.

The long awaited sequel brought audiences back to the island from the first film, and looks to have benefited from marketing itself to the nostalgia of the original.

\"'Jurassic World' has in the most perfect way reconnected the dots of the original film and effectively recreated the Spielbergian magic that made the first film such a quintessential touchstone,\" said Paul Dergarabedian, a senior media analyst for Rentrak.

Away from stirring memories, it also helped that \"Jurassic World\" had Chris Pratt as its lead star.

Pratt is arguably the biggest actor in Hollywood coming off of a huge 2014, when he starred in blockbuster hits like \"The Lego Movie\" and Marvel's \"Guardians of the Galaxy.\"

Thanks to the big premiere of \"Jurassic World,\" Universal also continues its 2015 hot streak.

The studio has had several box office hits, including \"Fifty Shades of Grey,\" \"Furious 7\" and \"Pitch Perfect 2.\"

And the studio still has some heavy hitters to come: The Mark Wahlberg comedy \"Ted 2\" opens at the end of the month, and the \"Despicable Me\" sequel \"Minions\" opens in early July.

With a bad Memorial Day, the summer season slumped with three down box office weekends in a row. But the thunderous opening of \"Jurassic World\" might mark a turnaround.