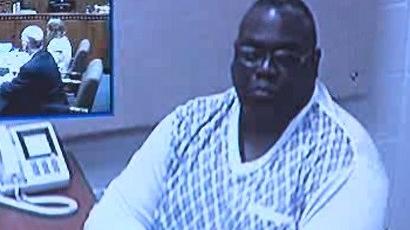 Milwaukee County Judge Mark Sanders told the State Department of Health Services and Milwaukee County to re-evaluate the locations to put convicted sex offender Clint Rhymes.  Rhymes has been stuck in an ongoing debate between municipalities and the state DHS about where to put him.  His crime happened in Milwaukee County and state statute says sex offenders get placed back where they committed the offense.

However, DHS initially wanted to put Rhymes in an area that some Milwaukee leaders say violates a new sex offender ordinance in the city.  After that, DHS decided to put Rhymes in the small town of Eldorado, Wisconsin which is Fond du Lac County.  Residents there strongly opposed the placement at public meetings and the town quickly passed an ordinance against it.  DHS withdrew that decision recently.

Now no one seems to know where to put Rhymes.  At a court hearing Wednesday, Judge Sanders said this sheds light on a much larger issue across Wisconsin when it comes to placing violent sex offenders on supervised release.

"This highlights the difficulties that we collectively face in connection with the current structure of sexually violent persons and their release into the community," Sanders said.

The judge ordered a review by the state and Milwaukee County in 60 days about possible landing spots for Rhymes.  He won't be going to Fond du Lac County.  The attorney for the Town of Eldorado and the Fond du Lac District attorney attended Wednesday's hearing in Milwaukee.

"Our concern in this circumstance was our community was never even consulted," Fond du Lac District Attorney Eric Toney said.  "DHS basically came in and said this is where he's going to be placed. They didn't talk with local officials, they didn't ask for any input and we didn't see why FDL county was selected other than maybe we had a bed available."

"If the goal is to rehabilitate them," Parmentier said. "The right solution is to place them in some place that they have ties and they have a network they can rely on."

This case will be back in front of a judge in February 2016.