Jordan strikes back at ISIS after pilot's killing 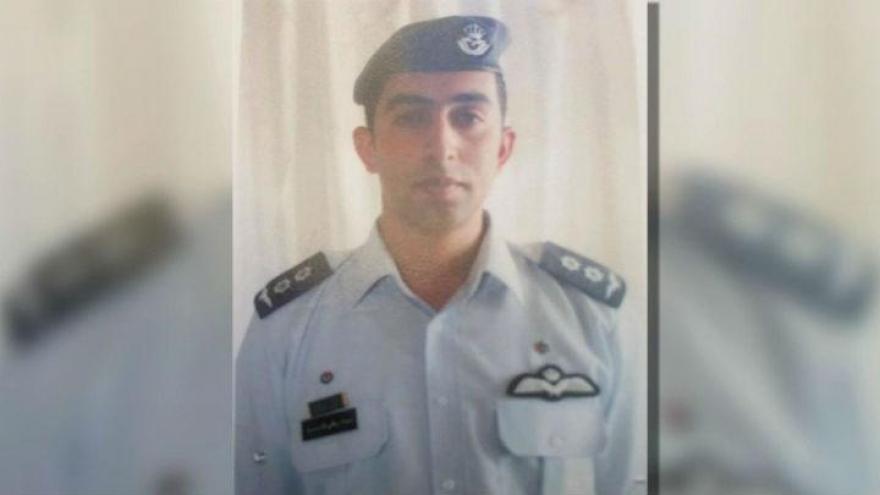 KARAK, Jordan (CNN) -- Two days after news emerged that ISIS had burned a captive Jordanian pilot to death, the Middle Eastern nation has hit back.

Jordanian fighter jets carried out airstrikes Thursday then returned home to fly over the home of the slain 27-year-old pilot, Lt. Moath al-Kasasbeh, in the village of Ay in Karak governorate. King Abdullah II, there to offer his condolences to al-Kasasbeh's family, pointed out the military aircraft overhead as proof that Jordan was responding with force, according to the executed pilot's father.

The father, Safi al-Kasasbeh, told CNN that the King promised him that Jordan would avenge his son's death and bombard ISIS' de facto capital of Raqqa in Syria. On Thursday, he added that the King told him that 30 Jordanian fighter jets participated in the strikes.

"The homeland is entrusted to you all," he said alongside the King, in remarks shown on state television, referencing Jordan's military and calling for national unity. "... For you (troops), to honor Moath is to uphold your oath and to follow in his footsteps as soldiers for God, his prophet (and) Islam ... in defending this dear homeland."

The video of his son's execution came out Tuesday, though Jordanian authorities say they think he was killed a month earlier.

Whatever the timing, the proof and savagery of Moath al-Kasasbeh's death have moved many in Amman and elsewhere to not just condemn ISIS, but to vow strong actions against it.

Government spokesman Mohammed al-Momani told CNN on Thursday that Jordan's response to the killing "will be strong and will be decisive."

"We will not let this crime of killing our pilots with the horrific way it was done pass without punishment," al-Momani said. "These people will be punished."

Analyst: Military response must be sustained to work

Thursday's strikes were the latest that Jordan's military has carried out against ISIS, which captured al-Kasasbeh after his F-16 fighter jet crashed around Raqqa on December 24.

Jordan is one of a handful of Middle Eastern nations taking part in the U.S.-led military coalition against ISIS. And this air campaign continued Thursday with strikes elsewhere in Syria, including near Hasaka, about 150 miles (240 kilometers) northeast of Raqqa. ISIS posted photos of the destruction, and Syrian Observatory for Human Rights director Rami Abdurrahman reported that 10 militants were killed.

Still, for all the continued international response, Jordan has clearly been moved the most by al-Kasasbeh's death, as evidenced by its actions and ratcheted-up rhetoric.

On Wednesday, Jordan executed two prisoners -- Sajida al-Rishawi, a would-be suicide bomber whose release ISIS had previously demanded as part of a prisoner exchange, and Ziad Karbouli, a former top aide to the deceased leader of al Qaeda in Iraq, Abu Musab al-Zarqawi.

Those actions are not enough for al-Kasasbeh's father, though.

"These were criminals and there is no comparison between them and Moath. His blood is more valued than Sajida al-Rishawi and Ziad Karbouli," Safi al-Kasasbeh said. "... I demand that this criminal organization (ISIS) ... be annihilated."

In addition to meeting with al-Kasasbeh's family, King Abdullah II on Thursday visited his armed forces headquarters, according to the state-run Petra News Agency. He voiced confidence in Jordanian troops' readiness and got a briefing on the latest airstrikes.

It's hard to tell right away how effective Jordanian military's mission was Thursday, or what the military will do next.

Retired U.S. Army Maj. Gen. James "Spider" Marks, a CNN military analyst, said the most important thing will be not just to have one strike but a persistent effort that's well-coordinated with the coalition military effort.

"It can't be a revenge attack, it can't be vitriolic," Marks said. "... If emotions brought them in, that's fine. But at this point, it needs to be a relentless, aggressive attack ... objectively controlled so that you can achieve results on the ground. And it needs to be sustained."

ISIS apparently made a big show of the pilot's brutal execution in Raqqa, with an activist network -- Raqqa Is Being Slaughtered Silently -- reporting that the killing was being shown, repeatedly, on large screens across the city.

One of ISIS' propaganda production outlets posted a video online that appears to show a crowd cheering as flames around the pilot grow.

The video features a tight shot of a boy, looking up as if in awe and saying that he would "burn the pilot" himself if he had a chance and that "all Arab tyrants should also be burned." The boy can also be heard saying, "Obama the dog."

Because the video is carefully orchestrated propaganda, CNN has no way to know if people in Raqqa really feel this way, if other children were present or whether the video participants' responses were authentic or a result of intimidation.

Contrast that to the scene hundreds of miles away in Jordan, where demonstrators hit the street demanding ISIS be hit hard.

One protester held a poster that read: "They burned our hearts, so let's burn their dens, and their prisoners in our prisons."

Sheikh Shawki Ibrahim Abdel-Karim Allam, the grand mufti of Egypt, is among those influential Muslims -- both clerics and political leaders -- who have condemned the burning of al-Kasasbeh as "barbaric," telling CNN that it's "far away from humanity, much less religion."

It's also contrary to the goal of the group calling itself the Islamic State, which seeks to form a vast caliphate governed by its strict, perverse version of Sharia law. The pilot's killing will only hurt that cause, said Shaykh Muhammad al-Yaqoubi, who was a prominent Sunni Muslim cleric in Syria before heading into exile as the civil war there raged.

"ISIS wanted to instill terror and fear in the heart of its enemies," al-Yaqoubi told CNN's Christiane Amanpour from Morocco. "... What's happening is the opposite.

"The martyrdom of Moath has united Muslims ... against ISIS, leaving no slight room of doubt that these people do not represent Islam. They represent savagery, terrorism and extremism."